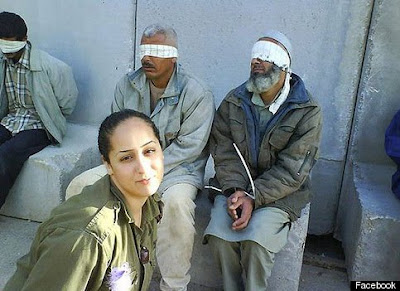 I agree with Eden Abergil when she says that the posting of her pictures on Facebook has been blown out of proportion.
This fresh faced lady had only intended to share with her loved ones 'the best time of her life' in the Israeli 'Defense' Forces; a formative experience in the life of many Israelis. This is a coming- of-age time to be cherished, remembered and revisited whatever career path these youngsters choose for their future. Blindfolded or not, the Palestinians are at best stooges and at worst a nuisance in an exclusively Israeli production. Theirs is not dissimilar to the role ascribed to Red Indians in a Spaghetti Western. They don't speak much, and when they do it is to utter robotic nonsense in a heavy accent. Without them the decorum just wouldn't be complete but the same could be said of the cactus or the olive tree.
So here goes Eden, a model soldier as she claims... or did she mean a soldier model. Having been dubbed 'super-sexy' by her commenting friends as she poses all smiles for the camera while elderly Palestinian men stare into the darkness of their blindfold. There is no hint of her feeling sorry for these helpless characters then, and now that she is made to explain her behaviour. Her reluctant apology addresses the potential public relation damage inflicted on Israel, not the moral dimension of her actions. 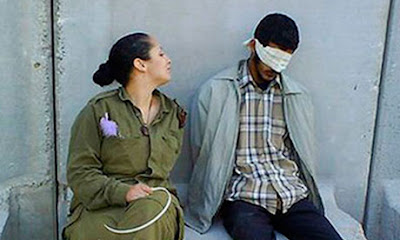 What is lacking here is not shame. Eden is not a 'bad apple' in the league of a Lynndie England torturing and sexually abusing in Abu Ghreib. No, she is boringly mainstream in a society that has relentlessly dehumanised its enemy to justify its own 'humane' project born out of the Prison camps of WW2. What is lacking instead is empathy: a skill that is harnessed in health professionals and that is actively supressed in military personnel (across the globe). The added dimension in the case of Israel is that its civilian society also suffers from the inability to empathise with 'the other'. As such, Eden cannot be blamed for not identifying at any level with the Palestinians, in their suffering but also in other mundane aspects of their lives (She jokes for example on whether the blindfolded man has a Facebook profile, as if such thing was inconceivable...for a West Bank Arab).

Having been quick to condemn, the Israeli military is unlikely to update its core curriculum in consultation with Amnesty International or the Quaker movement. Eden, had she still be enrolled would not have been lectured on the fact she has humiliated men who have daughters of her own age; living breathing human beings with an intellect, a story and a future. She would instead be encouraged to listen and learn from the polished Mark Regev as he quickly reclaims the moral high ground against the barbarian hordes that threaten civilisation.

Her actions were totally unprofessional, but I think you stretch your point too far by expecting any military to cultivate empathy for their enemies. Empathy is for civilians and as you say medical professionals and is sorely lacking on both sides in the civilian populations. A military's duty is national defense, protect their own. They should act professionally, morally and with discipline. Eden most definitely missed the discipline part, but her actions can be best described as a college students prank.

"the Israeli military is unlikely to update its core curriculum in consultation with Amnesty International or the Quaker movement. Eden,"

Nor is any other military or armed militia. I don't see the point of this sentence mentioning Israel in it.

if you believe this is merely an issue of discipline beyond any moral dimension, then we have a fundamentally different views of the world and of essential values.

My main point is that IDF is no different than any other military. Soldiers face an enemy wanting to kill them. Our youths are thrown into an arena of violence and bloodshed that is hardly moral. Yet those not in their position expect them to hold to a civilian sense of morality. Not possible when both sides are beating the war drum for either sides fighters to treat prisoners with total respect.

My Indian ancestors were a warrior people, so much so they nearly wiped themselves and their enemy out long before Euros arrived. There came a point when they just had to say enough war, had the Great Peace and formed a confederation that became the first Democracy on the continent. My hope is that Lebanon with it's division and the wider area come to the same realization as my ancestors and experience the prosperity of peace.