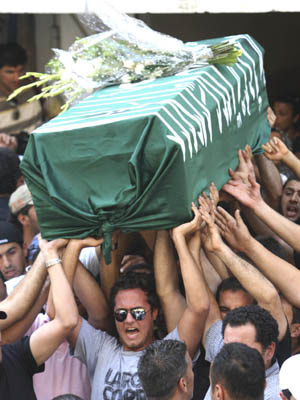 The recent street battles in the district of Aisha Bakkar followed a series of celebratory display of fire power by the fans of the speaker of Parliament Nabeeh Berri and the supporters of newly appointed Prime Minister Saad Hariri. Both factions had been at it in the past but these clashes had a special flavour. Not only did they come after a period of pre-electoral truce but they also resulted in the death of an innocent 30 year old mother of five. The casualty, Zeina el Miri, was a Lebanese national of Kurdish background and a Haret Hreyk resident. In the chaos that gripped this crowded Beirut neighbourhood it is unclear who shot her and how. Nonetheless, the late Zeina being Sunni her death was obviously capitalised on by the Sunni faction involved in these clashes. Less than 24 hours later, her body was being carried by young men through the streets of Beirut wrapped in an Islamic Flag, incidentally also the flag of the Kingdom of Saudi Arabia. The symbolism in the choice of flag was not lost on everyone; the sectarian conflict is well underway in Lebanon and has stopped surprising. I mentioned a few months ago that the Sunni-Shia confrontation has in fact been relentless, but reinvents itself by taking a variety of forms that prevent it from degenerating into all-out-war just yet. The internal bickering among Christian political forces has so far served as a buffer, allowing a proxy political debate of some sorts, which culminated in the recent parliamentary elections.
Now that these have re-generated almost identical conditions, plus or minus a few MPs here and there, the tight balance between the communities is only maintained by regional consensus. As is common in the Middle East, this consensus is volatile and has the potential to disintegrate at any point in time. The Christian ‘buffer’ is unlikely to be a permanent fixture. While there is little risk of them being dragged into direct armed confrontation, isolating themselves from the consequences is not an option either. Despite years of civil war, Lebanon’s sects still reside in interwoven networks of neighbourhoods and villages. The separation was never complete given the size and the landscape of the country. This proximity is a source of hope for a more integrated future but in the current climate also a powder keg. In that Walid Joumblat’s astute efforts to neutralise the impact on his own sect, the Druze, might prove futile.
The sectarian leadership has proven once again that it is neither willing nor able to dampen the tension on the streets. In a scenario reminiscent of 1974-75, he army finds itself a ‘peacekeeping’ force with limited mandate and only intervenes after blood has been shed. Bab El Tebbaneh-Jabal Mohsen, Tareek El jdeede and now Aisha Bakkar. The flashpoints multiply within a stone throw from the more affluent areas where business continues as normal.The behaviour of Nabih Berri and Saad Hariri following the events was laden with hypocrisy. Akin to tribal chieftains they made a few phone calls to re-establish order and pacify the hearts. The profiles of the two leaders couldn’t be more different. One a veteran self made warlord, the other the 39 year old heir of a politico-financial dynasty. At first glance, Berry has the experience of backstreet politics but might be reluctant to engage his ally Hezbollah in another tactical suicide in Beirut. Hariri on the other hand, having no doubt learned the lessons of May 7th 2008, when his supporters suffered a heavy defeat at the hands of the Amal-Hezbollah, is likely to surround himself with advisors with ‘civil war’ qudos. This mentality on both sides is in direct contradiction to the ‘spirit of the statehood’ that they invoke in their speeches.
All is not well in the country of the Cedars. The taboos are falling, slowly but convincingly and a generation of militiamen is being bred under our eyes. The path to war is not yet irreversible but to ignore the warning signs amounts to criminal negligence.

Can I have a word with you? buy clomid fast http://wiki.answers.com/Q/User:Med-help buy clomid overnight delivery I'm sorry to see you go.

How are you doing? valtrex cost http://www.stumbleupon.com/url/tentology.net/buy_valtrex_en-us.html valtrex cost Thank you very much.

May I ask you a question? buy clomid buy clomid
buy clomid I'm sorry to see you go.

How are you feeling?
buy zithromax http://www.playlist.com/blog/entry/12529890051 buy zithromax Here's to you!