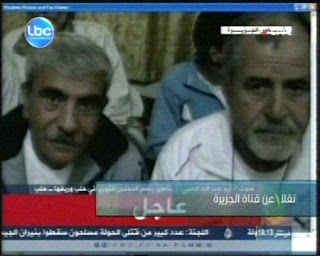 Joseph El-Khoury
I rarely agree with Hasan Nasrallah. But the comments he made in his latest televised speech on the media's handling of the Lebanese detainees in Syria resonated profoundly with me. Nasrallah was less composed than usual as he accused the media of prioritising their need for a scoop over any other implications.

I shared that feeling from the time that Tania Mehanna irrupted all cameras blazing into that living room flanked by a smiling Abou Brahim. the detainees, whose political affiliation would be fairly predictable went on, in response to Mehanna's questions to voice unconditional support to the cause of their captor. some were more restrained than others, but all displayed fear and despair.

I do not know who thought that the visit to Ezzaz, the town near the Turkish-Syrian border, was a good idea. Where did the inspiration for the scoop come from? Was there any consideration given to the impact it would have on the detainees, their families or the wider public. Until that date most Lebanese had had a fairly abstract relation with the subject. We knew the detainees had been kept safe and were awaiting for the unravelling of some regional arrangement so they could return home.
The prolonged visit of the Lebanese TV crew created an unprecedented personal bond between the public and all the actors in this tragic soap opera.  It is hard to see how this would not have played a role in the retaliatory kidnappings carried out by Shiaa clans over the last few days.
LBC and New TV, for all their declared good intentions, in effect contributed to the humiliation imposed on these detainees by the Syrian rebels. Parading them helpless and fearful; asking them to make statements under duress while portraying an atmosphere of osmosis between captor and captive can only be described as unethical. One would remind these media professionals that PRESS TV, the English language outlet of the Islamic Republic of Iran, had recently been prevented from broadcasting in the UK under the premise that they had interviewed an opposition activist who had been detained and tortured by Iranian security forces. I agree totally with the principle. Being forced to make statements you do not agree with is humiliating. Humiliation is traumatic, whether it follows torture or intimidation. Broadcasting the humiliation of a human being makes you complicit in it.
Many who followed the saga in screen drew parallels with the 'Stockholm syndrome'. This psychological term was coined by experts following a bank robbery in 1973 Sweden. It refers to the situation whereby a hostage develops empathic bonds with his captor and becomes complicit in his own kidnapping. There are a number of variants of this syndrome, which rely on many factors; the need for self-preservation being one of them.  Thanks to Tania Mehanna and her colleagues, we have now a media-manufactured Stockholm Syndrome. The consequences so far have been dreadful and with the bombing that followed and might have cost the lives of some hostages, the dust is still to settle both literally and psychologically.
Better care next time.

Wow what a great article. I am really impressed to read. Thanks for sharing it with us.
ipl winners list
ipl tickets 2018
ipl orange cap winners
ipl purple cap winners

Packers and Movers Bangalore as a Services providing company can make all the difference to your ###Home Relocation experience. Bangalore based Company which offers versatile solutions, Right team that easily reduce the stress associated with a ✔✔✔Household Shifting, ***Vehicle Transportation. we help things run smoothly and reduce breakages and offer you seamless, Affordable, Reliable Shifting Services, Compare Shifting Charges. @ Packers And Movers Bangalore