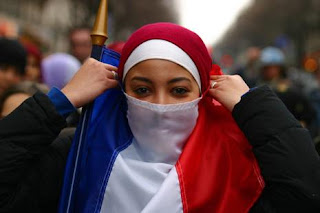 "The approach of multi-cultural society has failed totally; immigrants should integrate and adopt Germany's culture and values"
Angela Merkel – Chancellor of the Federal Republic of Germany
Back in the 1970's France and Germany actively encouraged the immigration of mostly North-African (France) and Turkish (Germany) workers in order to provide the manpower for their booming construction and manufacturing sectors. This was out of necessity, faced with on-going crisis in the availability of local qualified workmen and the cheap cost of foreign labour compared to local wages. Both governments at the time and even later on did little to set any socio-cultural vision with regards to the integration of the new minorities within their respective societies. Instead, the focus was on short term benefits while big factories exploited a workforce eager to work and poorly aware of its rights. (long working hours in contradiction with the regulations/labour laws - insignificant salaries - poor housing conditions etc...). This state of affairs led to a voluntary self-isolation and a re-adherence among this group to the cultural/social/religious values of their country of origin. This phenomenon was transferred to the second generation immigrants in the form of relatively stronger adherence to these ‘traditional values’ (mostly those born in the 1980s).
Today, although the main issues and problems regarding the integration of the immigrants and their descendants are focused on the main cities and suburbs (Paris/cites; Berlin and its suburbs etc...), the various election results since 1986 in France and mid-nineties in Germany reveal a sustained progression in the percentage of the vote acquired by right wing and far right wing formations in rural areas where the issue of integration is a theoretical one, far removed from local concerns. The number of votes obtained by these same groups is on the other hand shrinking in the main cities. More recently the French right wing UMP lost all the major cities in the latest regional elections after losing the municipality of Paris more than 10 years ago.
How to explain this voting behavior?
The Conservative Right and their more extreme counterparts are known to emphasize the importance of the ‘traditional’ values of the nation. They also warn of the influence of these minorities that bring their own cultural values and develop an environment incompatible with the notion of a liberal republic. This discourse is strongly supported in the rural zones where the population is more traditional and conservative in outlook compared with the urban, more mobile and exposed population.
Nonetheless the impact of this voting pattern is felt nationally as it consistently ensures a large number of votes during the various elections (parliamentary elections – municipality elections – regional elections etc…) without too much effort. Suggesting serious solutions to the problem of minority and integration in the European society was never really on the agenda of the mainstream European Right. (No need to mention the extreme right wing formations here since their wish is the expulsion of most immigrants "legal and illegal" from the country). The intentional absence of concrete plans and solutions combined with the xenophobic speech orchestrated by the right will always be profitable in terms of votes at the end of the election day.
On the other hand, the continuous self-isolation policy conducted by minorities and the antagonism shown to the central authority in response to years of negligence by the European governments since the 70s were fertile grounds for the emergence of societal violence in the form of:
• On-going acts of violence in the main cities: violent demonstrations, burning and cracking stores, attacks on public facilities and institutions. (We should point out here that the security forces arrogant /traditional xenophobic attitude against the minorities is a factor too).
• Large number of immigrants/immigrants descendants joined Islamofascist European cells or at least sympathized with their cause. (Keeping in mind the impact of Western policies in the Middle East and their unconditional support for Israel).
The problem of minorities in European society requires a thoughtful and clear solution that takes into consideration on one side their current social situation and their cultural/religious background and from the other side the need to develop an integration plan based on human rights principles and the respect by the immigrants of the laws and regulations of the republic and its social contract.