The Hypocrite Inside of Me 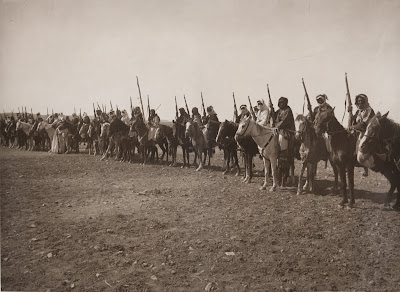 "The true hypocrite is the one who ceases to perceives his deception, the one who lies with sincerity" Andre Gide (1869-1951)
So much has happened over the past few weeks that I struggled initially to find a specific thread for this piece.
To state the obvious, the Middle East is on the move after decades of stagnation and the absence of meaningful macro-political evolution, effectively since the 1980s. Being one of those who spent their University days dreaming of a new dawn of ‘Arab Revolt’ that would reverse the status quo emanating from the last Arab Revolt (Think Lawrence of Arabia, Lord Balfour and Sykes-Picot), I was bound to be shaken and stirred by the sight of hundreds of thousands of Arab men and women taking to the streets of Tunis, Cairo, Sana’a and now Manama and Benghazi in the name of a basic right to human decency. But a lot has been written about the emotional connection that transcends the fictitious borders established by the colonialists and their heirs. With my growing dose of cynicism, I will not be able to compete with the revolutionary fervour that has swept Tahrir square but also Twitter and Facebook to land at the doorstep of every Liberal Orientalist enthusiast. So I will stick to pointing out the slightly perverse side of the current maelstrom (not to be confused with Tsunami in the Lebanese context).
The Arab uprisings and specifically the Egyptian chapter of it uncovered a latent hypocrisy that defines the position of pretty much everyone interested in the Middle Eastern question. Many insist that Democracy is at the core of their wishes for this region. I would argue that it is more a case of democracy with a small ‘d’ that we all humbly aspire for. The US administration, which is contemplating the most serious threat to its regional pack of cards within matter of months proclaimed its understanding of the people’s aspiration, having spent decades and millions propping up the ugliest authoritarian regimes. You only need to google images of ‘Obama and Mubarak’ to confirm the admiration that the former had for the latter, until 10 minutes prior to his departure from office. France’s 180 degrees on the defunct Tunisian regime was as sharp. Ben Ali got on his plane believing Sarkozy was a genuine buddy to be disowned by the time he flew over Sardinia. But hypocrisy is not particular to our American friends. Fellow Arabs, of the ragtag Leftist, Islamist, Nationalist, Anti-Zionist alliance have so far successfully managed to shut down half of their brain matter in the assessment of the credentials of their own anti-imperialist allies. Iran, Syria and to a lesser degree Qatar are either ignored or reluctantly mentioned under duress as textbook examples of authoritarian, autocratic and intolerant regimes. The Baath party’s fondness for the art of political imprisonment and the Iranian Mullah’s tendencies for repressive social regulation are weighed against their supposed determination to liberate Palestine. I will not even comment on the Israeli government position, as the ‘Only democracy in the Middle East’ Pin-up verges on losing its misleading title while eyeing another expansionist adventure to its North and to its South. As for me, I will come clean and declare that I am torn between my animosity for the dictatorships and my discomfort at Islamist movements taking over the task of defining the next few decades, which I believe to be the likely outcome of recent events (and I say this out of conviction rather than scaremongering).
So the Egyptians rioting in Tahrir have also displaced the fig leaf and we have all been revealed stark naked for our biased, selective and superficial subscription to democratic principles, nominally the rule of the majority within a system guaranteeing the safeguard of individual and communal rights. Displacing one tyrant is no guarantee of freedom and prosperity. All is not lost and Democracy with a ‘D’ can be earned through the multifaceted struggle that begins once the naive anarchist fantasies of some are satisfied. This struggle will need to be led by reformists in the old tradition of a spearheading core with a solid perspective on the near and distant future. The uprising, beyond its very powerful symbolism in shattering the psychological wall of Arab impotence, should remain a means to an end. That end is still ill defined among true reformists and incomplete revolutions offered on a platter to military opportunists or retrograde faith/ethnically based organisations may yet bring a series of new challenges.
By all accounts this promises to be an exciting year... but then so was 1918. Unless!

Well said Joe. Skeptics of the world unite!
Personally, I am optimistic, albeit cautiously so! But i am certainly not cynical. How can one be, watching a peaceful people topple a mighty dictatorship?!
The Egyptians that I know, many of whom were in Tahrir, are themselves still on guard. To me this is a sign of maturity. On TV interviews most ordinary Egyptians say this is just the beginning. So, I say there is hope and what happens in Egypt in my view is what matters most at this stage. But Tunisia's continued struggle also offers cause for hope. The people (never thought I'd use this term again!) there seem to refuse to compromise.
All in all, my gut feeling is the wave will sweep all, including Iran and Syria (probably in that order). The only exception will be Lebanon, I think... but may be I'm just being cynical :)

I share your cautious optimism. Hence the 'Unless!' at the end.

But my ideological background reminds me that the promised reform is likely to resemble the reformist. And so far I am not convinced that at this time that those who initiated this uprising will be the ones to set its direction.

As for Lebanon, my Andre Gide quote above sums up my view of those supposed reformist. So on that front less optimistic.

Good to hear from you.