Autumn leaves... the promise and threat of the Arab spring 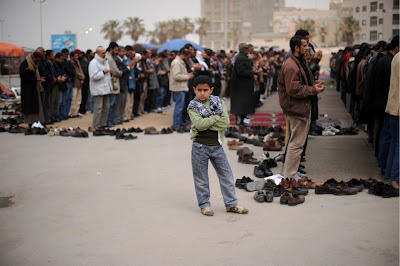 
As the popular Arab revolts approach autumn, the tree of Arab dictators is shedding its leaves. One after the other they fall. Some fell when the tree was merely shaken, others after a strong wind and still others after a raging storm. The storm still rages, the tree is shaking violently and the remaining leaves will fall… yellow, crooked and dry.

Arab societies are vastly different from one another in terms of their social organization, institutions of state and history of independence and governance. Yet, they share the fact that they are governed by corrupt oligarchies often lead either by a family or a single brutal figure. As such it is perfectly understandable that the discussion over the future of post-revolutionary Arab nations centers upon the idea of democracy. Clearly, no Arab future is likely to be bright and hopeful without democracy. However, democracy is a vast and complex notion and today exists in almost as many forms as there are democratic states. The question therefore is what basic standards of democracy might we call for in the new Arab nations emerging from the settling dust of the liberation battles?

Perhaps a useful parameter against which to measure this notion is the path of democracy in modern Arab history. Today, one might speak of two democratic countries in the Arab world: Lebanon and Iraq. The former has a relatively long experience with its democratic system, while the latter has a rather new experience with its system. What the two countries share is a very troubled unstable history with their democracies. A logical assumption therefore is that the common elements of the two systems underlie the shared trouble they have with democracy. Those common elements are a system of power sharing based upon religious sects and heavy intervention in internal affairs by conflicting outside powers. Thus, the Arab revolutionaries in Tunisia, Egypt, Libya, and soon Syria would be well advised to avoid anything resembling the Lebanese or Iraqi “democracies”.

Arab people across the region deserve the freedom and democracy they have paid for with decades of oppression and poverty and months of bloodshed. They also deserve a democracy likely to sustain them in the long term. They deserve a democracy that will allow their societies to develop solid economies, modern educational systems, sustainable infrastructures and institutes of knowledge creation. The brave young Arabs who rose to defy the heritage of their defeated and defeatist fathers, but also in equal measure the dark prophecy and evil instruments of small but violent minority of religious extremists, deserve a future in which they are all equal in rights and duties regardless of age, gender, ethnic origin, spiritual conviction and life style. Those who paid with their bodies and risked their lives, and the memories of those who lost theirs, deserve a future in which Arab peoples stand in social solidarity within and between their countries, while respecting each other’s right to independence and self-determination.

All these gifts do not come cheap and they do not come easy. All these rights and privileges are not given, but rather created. All this promise held within the very nature and course that the Arab revolutions have decided to take, does not come merely through claiming democracy and holding elections. Lebanon and Iraq are a sadly non-shining example. For the Arab spring to someday shine a beautiful sunlight and for the Arab tree to finally bear the fruit of progress, it needs to be planted in the soil of secular, socialized democracy. Any other form is short-term recipe for regression to the dictatorship of tribalism and its favorite mechanism of governance: civil war!

Really impressive post. I read it whole and going to share it with my social circules. pls visit .
Local Packers And Movers Bangalore