General Aoun and the Weight of History 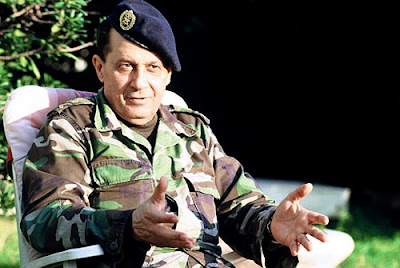 General Michel Aoun’s visit to Syria is a historic step. And although I have disliked the man for the most of 20 years, I will grant him that his ability to make history is second to none on the stale Lebanese political scene. His latest achievement took me back to another personal historic moment that bears his mark.
In the tangles of my childhood memories, 1989 is the year of General Michel Aoun. As an 11 year old boy my political opinions were simplistic and instinctive at best. We had been told for many years that the Syrians were not our friends, although politicians diverged over the amount of enmity we should have for our cousins to the East. The General had emerged the previous summer as the new kid on the block, bringing with him the righteousness of the former soldier and an unspoilt record at the head of the Army.
The country’s institutions suffered a severe case of Doppelganger and tension had been building for weeks between the interim government and the militias which controlled various illegal ports. The General gave an ultimatum and on the morning of 14th March 1989 rockets fired by an unidentified source killed and maimed dozens in Muslim West Beirut. By tea time, hell had been unleashed on civilian populations both sides of the sectarian divide that separated the Christian Heartland from the rest of the country. That makeshift wall of separation was less shameful than the one being erected in Palestine. It had been carefully crafted for years out of scrap metal and sand bags. The beleaguered Christians treated it as a safety blanket or a panic room, and did not mind the ‘rat in a cage’ effect as long as it kept them safe from the unruly and occupied Wild West (For West Beirut). From our perspective the occupying army was Syrian. We had had an uncomfortable relationship since it entered the country in 1976 but all ambivalence was lost as their artillery was let loose to pound the narrow strip of land we called ‘The Eastern Region’. Heavy shelling from the surrounding hilltops set ablaze residential neighbourhoods in the Capital and in Mount Lebanon. Beefed up by steady stream of Iraqi ammunition Lebanese units under the command of Aoun, supported (some say half-heartedly by Geagea’s Lebanese Forces) returned fire in supposedly targeted fashion.
That evening, in the Town of Jounieh, around 20 local men were gathered sought relative shelter and definite entertainment in my father’s office as the battle raged outside. The gossip dies down as eyes turned towards a small battery powered TV set, which dated back to the 70s. The President-General was addressing the people from his underground Baabda office, the Lebanese flag neatly displayed behind him. The combination of macho talk and military fatigues had the effect of strong liquor on us, numbing the sounds of the explosions and the fear gripping our hearts. We knew he meant every word as he declared the war of liberation on the regime of Hafez el Assad. I scanned the room staring at the old and young faces, filled with pride and hope. It didn’t matter who would die that night or the following nights as long Hafez was made to pay the price for the years of oppression.
The shelling continued every night while short daytime lulls allowed us to carry out essential daily living activities. Ten days later our apartment block sustained a direct hit as we had dinner at home. We luckily escaped unscathed but the close brush with death had its psychological toll on us. My father decided to ship us abroad while he remained in Lebanon. The blockade imposed by Syria was to be tightened that night as they targeted the cruise ship which was still ferrying refugees to Cyprus. A long frightening wait at the port was followed by another day. We finally embarked at sea, having been transferred by fishing boat, in what I can only describe without going into the gruesome details as a ‘Boat People’ experience. Women and children were lifted aboard through the engine room and then up the stairs through the small Bar and casino room. In a formidable display of absurd resilience, two men in suits were quietly sipping whisky in a corner: This was my first taste of exile. A worthy sacrifice I thought as the General’s words resonated in my head.
From Cyprus, we made our way to Germany, as it became clear that our stay was less temporary than we thought. Six painfully slow months passed, as we listened to the misery of our homeland described in the foreign media. And then came the cease fire. Everyone emerged triumphant, turning destruction and the slaughtering of innocents into success. My mother brought us back on the first flight from Frankfurt to Beirut: A MEA plane with on board 10 passengers. Pride was still the dominating feeling as we landed at a skeletal Beirut airport where I had never set foot before. The Door of the plane opened...and we were greeted by an impeccably dressed Syrian officer harbouring a shiny gun at his waist. Welcome to Lebanon he said grinning in Arabic! The liberation had failed then.
1989 had been challenging. We had been out of school for months, living in a foreign country and our family split apart. By the time the Taef accord was signed I had given up on Liberation wars. Unfortunately 1990 was also to be Aoun's year, from his bloody feud with the Lebanese Forces to his standoff in Baabda and his exile to France. Fifteen years in exile did not dampen the showbiz abilities of the man. He skilfully snatched 2005 from the Hariri clan and maintained himself at the centre of events throughout 2006 and 2007. He could only afford to surpass himself in 2008, which he did. Between you and me, I am seriously dreading 2009.

Interesting impressions. Just curious: why have you disliked Aoun?

Thanks for your comment Ann. To answer your quetion, probably because I felt betrayed. We had suffered on a personal level during that war. When the Taef accord were signed I was eager for peace and normality. Aoun rejected it outright and that was unjustifiable for me. Since then in my mind he has been nothing more than a confrontational and troublemaking figure.

Thanks Joseph, appreciate your response. It seems that even the most well-intentioned politicians are often too far removed from people's suffering.

Thanks a lot for your well articulated account of that period.
Although it is a very fair account of events, allow me to say, that your personal perspective and stance, as a result of the events, are quite dubious to me… You remind me of a Chinese proverb; “When rape is inevitable… Relax and enjoy it”
In my book, I believe “confrontation” and “troublemaking” is the best tools in the face of injustice and unfairness.
I personally believe that 2009 is going to be the year… where the record will be set straight again!

I think we both agree that change is needed and inevitable.

We disagree on the vehicle for it. Having flirted with political parties in my youth, i am convinced that only systems and institutions can bring about the change in mentality and attitudes that are required to safeguard this country.

I am less optimistic than on you on the ability of General Aoun or for that matter anyone else (parties or individuals)to create that change.

My hope for 2009 is that things dont get worse. And I am sure we wil follow up on that discussion during the year.

As long as they all (Parties and individuals) work and push through systems and institutions, I think this change will become inevitable…
Unlike you, the reason I am optimistic is that I see that most political stakeholders are currently working and mobilizing through systems and institutions… at least this is becoming the modus operandi lately…or at least on the road to that.
The challenge now is improving the systems and creating ones where they do not exist…to attract all players to work within the system… I admit that it is mammoth task… But no one said that creating keeping and up keeping nations is a simple task, specially a nation such as ours.

Political parties and grass-root movements are an intrinsic element of any System and Institutionalized political and democratic system. I agree though that it is definitely NOT about individuals or Specific characters.

I agree with you that idolizing political figures is not the way to the above, but at the same time any change has to have a god father, a leader or at least a Catalyst, until a tipping point is reached… This is how change has happened throughout history because mind you and here I quote Niccolo Machiavelli: “There is nothing more difficult to take in hand, more perilous to conduct, or more uncertain in its success, than to take the lead in the introduction of a new order of things."

General Aoun has definitely affected change in the Lebanese psyche, what is left to be seen is if this change would be consistent and enough to achieve a tipping point for a long lasting and intrinsic change that we all crave and need.

On the other hand and particularly if we need to go beyond the tipping point, the major question remains, if he will succeed in creating a movement, a system, and an institution that transcends him as an idolized political character, so that this change would not be a one of spike in our recent future history preceding a chaotic aftermath as a result.

My current bet, for now, is the tipping point…