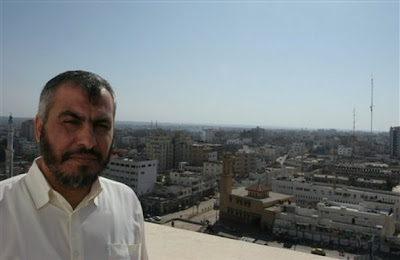 Hamas spokesperson Ghazi Hamad’s desperate efforts to portray his movement as moderate and mainstream felt a tad rehearsed, triggering sniggers from other panel members during an Aljazeera English debate on the latest events in Gaza.
The heavy fighting over the weekend pitted Palestinian security forces, essentially under Hamas control, against a relative newcomer on the Islamist scene, known as the ‘Jund Ansar Allah’ or ‘Soldiers of the supporters of God’. This Salafi organisation of a few hundred members and apparently linked to the kidnapping of BBC Journalist Alan Johnston a few years ago, had been growing steadily and recruiting aggressively among the disaffected youth in the impoverished city of Rafah in Southern Gaza. As part of his diatribe Mr Hamad declared: ’These guys don’t understand Islam, We understand Islam’; an accusation that ironically had been levelled at them by Fatah in the past. Similarly he claims that his organisation never forces its beliefs on others, while the reality in Gaza reveals a systematic islamization of society organised by Hamas since it took over control of the district.
Only a few weeks earlier we read press releases indicating that Female lawyers were instructed to wear the veil while conducting official court business. Other reports suggest that Hamas is no longer content of focusing its task on fighting the Israelis but is determined to remodel Gazan life according to its religious and moral principles. Realistically, the movement doesn’t really have much choice, having dug itself into a hole by evicting Fatah to the West Bank and failed to emulate Hezbollah in the latest Gaza war, it is limited to capitalising on its religious platform.
Obviously they are not responsible for every brand of Islamism within Palestinian society, but on this account had so far only been rivalled by Islamic Jihad, a much more elitist organisation with no limited grass root support. In addition, any discerning observer with basic understanding of political Islam, will be aware of the radical differences between organisations such as Hamas (and Hezbollah) on one hand and the Global Jihadists of Al Qaeda. Their lumping together by the Western media only mirrors Israeli propaganda which equates between Palestinian resistance to occupation (regardless of how misguided and counterproductive) and the delusional behaviour of a group of religious fanatics. It is easy to forget that the West used military force in Iraq to bring to power political parties that would find themselves to the Right of Hamas ideologically, but what is ‘Kosher’ in Iraq is ‘Haram’ in Palestine.
Nonetheless, it is Hamas, aided by the Israeli blockade, which bears a large part of responsibility for creating an atmosphere where Islam could be used as a political tool in settling disputes and labelling opponents. A number of commentators have highlighted the rehabilitating benefit for the militants of having dealt a deadly blow to those who dared be more ‘Muslim’ than them. Others feel that this is not the last we will hear from the Salafis and that the appalling human situation in the strip has the potential to breed further unbridled fanaticism.