The Politics of Recycling 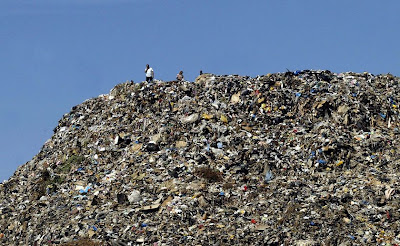 Recycling is thriving in Lebanon...from the recycling of old tunes by the 4cats and other mediocre leather clad divas to the recycling of slogans, images and political discourse. As ever, the Palme D’Or goes to Lord Joumblat, the Darth Vader of the Druze Mountain who has been delivering a well choreographed performance over the past few weeks. The cherry on top came in the form a speech, more like a confession, full of reference to Arabism and Socialism. The flirtation with neo conservatism ends in a half baked Mea Culpa only two months after the historical electoral battle for the soul of Lebanon. I will not dwell on the Beyk’s socialist credentials, having covered them in a previous post. But I will point out that Arabism or Arab nationalist rhetoric has proven many times before to be the real opium of the secular people in Lebanon. In its name reform and revolution have been incited and scuppered. Joumblatt again proves that his behaviour is born out of tradition: Talk the talk and (in the absence of accountability) you won’t have to walk to walk. He leaves orphans behind as his conciliation tour covers the Iranian embassy and the headquarters of the Syrian Nationalists: The leftist idealists, fans of the late Samir Kassir and George Hawi, who are still unable to cut the umbilical cord inherited from the alliances of the 60s and 70s. Something tells me that they will fail to recognise that this final twist is an opportunity to grow up and mature as a political entity independent from the sponsorship of the Druze chieftain.
But recycling is not only a Druze hobby. The liberal economists of the clan in power have again sold us a summer of opportunities and rejuvenation. They are supported in their efforts by CNN, Paris Match and other foreign media reports excited over a Beirut soaking in sweat rather than blood. The realities of a divided, corrupt and impoverished country are set aside in favour of short clips revealing the hedonism of a Sky Bar or the opulence of a Baalbeck festival. What we are not reminded of is that Lebanon earned its reputation as the Switzerland of the east as the winds of civil strife were blowing from the countryside and that 1974 was an exceptional year for tourism. A year later, AK47s had replaced saxophones as a background symphony.
Not wanting to be left behind, the Kataeb are making a comeback. An essential player on the political scene until the 1980s, their rebranding as a measured yet militant defender of Christian interests under a Gemayel (Sami, not Nadim who is condemned to play a second hand role until he grows a personality) is a well timed move as the Aounist movement loses steam for lack of imagination.
And the mother of all recycling tunes is the ‘special relation with Syria’ to which all of the above adhere. The race is on to Damascus, literary funded by Saudi money, to kneel again at the emperor’s feet.
I wish we would all stick to glass, cardboard and paper. Recycling in politics is actually damaging to the environment.

It seems to me like the Lebanese are stuck on a treadmill of sticking to "traditions" and the same leaders of the past who have made the country halt in its political regeneration.
"Recycling" is the best way to describe it, really... It is counterproductive because they are trying to recycle material that is non-recyclable as is hinted at in this article. Time to realise that they need to find new ways of molding such a politically volatile society as they keep using non-recyclable material! Spot on.

I always run away from getting involved in Lebanese politics for this exact reason. They keep going around in circles with no real point to make.

The most important thing to remember is that we (those who are genuinely critical of the system and the situation) are as Lebanese as the rest of them.

We are a minority and not an insignificant one. But we lack leadership, unity and enthusiasm.

For example. I have received the petition on the rights of women to give their nationality to their children from various sources from inside and outside the country. These people ned a framework to make their views heard more consistently.

I am with women's rights to give nationality. Although, nothing in Lebanon is as simple as that. Giving them that right would mean augmenting our population with a significant number of Palestinians, Latin Americans and other Lebanese expats. That adds another demographic dimension to an already complicated one. It's like digging a hole to fill another hole.

So Afif, you are basically saying that men are more reasonable than women who will misuse their right.

A bit sexist don't you think?