Fadlallah's fatwa on Israel: An unhelpful addition to the debate 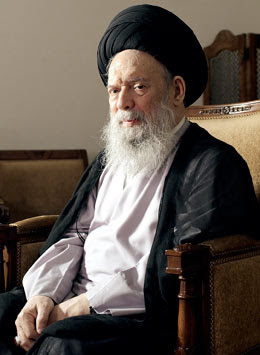 On Sunday 13th September 2009, highly influential Shiaa Cleric Sayyed Mohammed Hussein Fadlallah issues a fatwa from Beirut banning the normalisation of ties with Israel. For those who aren’t familiar with the concept, a ‘fatwa’ being a binding religious decree, similar in effect to the one issued by Ayatollah Khomeiny in the wake of the Salman Rushdie affair in the 1980s.

There is nothing new in the basic position adopted by Sayyed Fadlallah. The normalisation of ties with Israel is a highly charged issue at a time when there is no movement on the peace process front and the Palestinian state remains inaccessible. The problem lies with the premise he uses to justify his position. From what I read in the Arab speaking press The fatwa consists of 4 points which mostly reiterate the right of the Palestinian to the entirety of Palestinian land and the duty of every Muslim to resist the ‘rape’(Ightisab) of the land as the future of the entire Muslim nation depends on it. It also encourages other clerics to issue clear instructions to the believers and adopt a proactive approach in supporting the Palestinian cause. Point 2 is the one I found most controversial, especially when Sayyed Fadlallah is known for his measured words and open mindedness (in relative terms of course).

While most Lebanese and Foreign media only focused on the headline and the message of the fatwa, the Lebanese daily Assafir and the online media outlet El-Nashra gave a more detailed account of the actual statement. Assafir reports that in point 2 of the fatwa the Sayyed Fadlallah: “And it is the responsibility of the Arab and Muslim People, which day and night read in the Holy Koran, the history of these Zionists to realise that they did not have the acceptance of God, so how could they gain acceptance among people”. El-Nashra goes further: “Their history is only one of killing some prophets and rejecting others while obstructing their path, so that they have always been a problem in more than one historical period and a problem for people in more than one part of the world.” He goes on to justify that: “When we talk about the history of the Jews, we are not judging them on their past, for the Koranic message is one that the responsibility for history lies with those who committed it. Instead we point out that the attitude of their ancestors still continues to this day, and that there is a unity and consistency in the immorality and inhumanity of their stance, regardless of the modern change in discourse”.(Apologies for any inaccuracies in the translation)

I am honestly puzzled by the tone of the Fatwa, even if we consider that Fadlallah only intended for it to be head among his followers. Firstly, I am surprised by the casual use of Jews and Zionists interchangeably in the text, which seems to scupper decades of Palestinian efforts to re-centre their struggle as a political one against a colonial entity instead of an eternal ethnic-religious fight. Secondly, the lack of attention to Western sensitivities with regards to anything perceived as anti-Semitic discourse with National-Socialist overtones might also indicate a shift towards an overall aggressive stance that only relies on support in the Islamic and Islamist heartland to achieve victory over Israel. This aggressive stance can only reinforce the Zionist message that Jews in Palestine are threatened in their existence. Them who have been successful at stifling any criticism of Israel behind the cloak of anti-Semitism while convincing the West of some tenuous continuity between the Holocaust and their conflict with the Arabs. Fadlallah’s fatwa will soon join the image of the Grand Mufti of Jerusalem, Hajj Amin Al Husseini meeting Hitler in 1937 in the Zionist arsenal of propaganda.

Not being Muslim, I am neither the intended recipient of Sayyed Fadlallah’s message nor do I feel concerned by it. The position of Arab secularists towards the Palestinian issue should remain a principled yet pragmatic affair guided by the interest of the Palestinian people who have an inalienable right to auto-determination and the establishment of a fully independent state on the territories occupied in 1967, with East Jerusalem as its capital. Other more creative solutions are up for discussion but this minimum is non-negotiable.

Interesting analysis. I've been meaning to write something on this fatwa for the past 10 days, but instead have kept it lying idly on my desk (have you read the full text, it's on the Alama's site).

Many points you make are valid. However, a couple of them are not very accurate or can be confusing.

You define a fatwa as a "binding religious decree", which it isn't. It's actually a ruling on a point of Islamic Law given by a recognised authority. In western terms, it's called an "opinion". It can only be considered to be a "ruling" if the person who gives it has the necessary authority, and when he does have it, it is only biding to those who follow him (which is voluntary in Lebanon and among Shiites in general).

I'm also a bit surprised by your use of the expression "inalienable right" to the establishment of a fully independent state on the "territories occupied in 1967", that you later call a "non-negotiable" minimum. I believe you're combining two different rhetorical elements (which is quite confusing).
- One of them is based on a supposedly pragmatic compromise (why limit oneself to 1967 to establish a minimum, which in fact is presented today as a maximum).
- The other is based on a sort of "natural law" argument that is not too dissimilar from Sayed Fadlallah's.

I'm just throwing thoughts here. All this is a messy business. I really appreciate your efforts to clarify things and share them with us.

Now here's something interesting for you to mull over. You wrote "Fadlallah’s fatwa will soon join the image of the Grand Mufti of Jerusalem, Hajj Amin Al Husseini meeting Hitler in 1937 in the Zionist arsenal of propaganda.".

but a counter to the argument would be not in exposing its propaganda worth, but in debasing it - at the very least by abstaining from it personally, or taking the deep plunge and admitting the problem, protesting and encouraging other people to protest as well.

Just because something is useful as propaganda, doesn't mean it's untrue. and if you don't protest it - what position are you in to protest its use as propaganda???

I'm not sure I fully understand your point.

Am I supposed to protest the fact that an elderly Arab chieftain visited Berlin in 1937 at a time when his country was occupied by a foreign power (The British)?

One year later Chamberlain and Daladier met him in Munich for peace talks.

The propaganda value is in twisting this political maneuvre on the part of Al-Husseini into proof of endemic antisemitism in the Arab world prior to the Israeli-Arab conflict.

".....a time when his country was occupied by a foreign power (The British)?"

Palestine formerly was a province of the Ottoman, it was conquered by them as a foreign power, not a country. It was a place of mixed ethnic and religious peoples.

It is accurate fact not propaganda that Al-Husseini was antisemitic in the 1920's. His alliance with Hitler was more than a brief visit. He engaged in Nazi propaganda and lead a Nazi Hanzar division in the Balkans.

I dont know about the Nazi Hanzar division in the Balkan. And if he did, maybe this was his personal stand in a world war between 2 peowers, which has nothing to do with his antisemitic views (funny for a semite anyway). For your record some major US allies in the war on terror such as the Latvians and the Roumanians fought unashamedly alongside the SS. Can you also remind me of why exactly the US remained neutral so far into the conflict if it was so clear at the time that it was a 'good vs evil' fight? And a what stage did it become known that Hitler was systematically exterminating jews. So your 'facts' seem flimsy from this side of the pond.