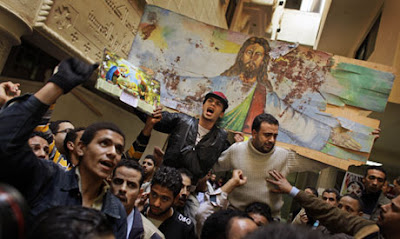 'We are this East's saints and its devils, we are its cross and its spear, we are its light and its fire; We are able to burn it if they burn our fingers, and we are able to light if they leave us with our freedom.' Bachir Gemayel (1947-1982)
No doubt some will be outraged that I choose to start this post by a quote from a controversial figure in the mind of many, but in these few powerful words that echo a supposed pre-Islamic golden era (Phoenician in Lebanon, Pharaonic in Egypt and Mesopotamic in Iraq) the then militia leader managed to articulate the image that Middle Eastern Christians have of themselves, whether they are Copts from Alexandria, Chaldeans from Baghdad, Greek Orthodox from Damascus or Maronites from the Lebanese mountains. The interesting thing about this perennial existential anxiety is that throughout history it has led Christian individuals to adopt dramatically opposed strategies to deal with it.
Some, like Gemayel have chosen to treat their religious community as a fortress, withdrawing behind sectarian legislation in Lebanon (The latest example being MP Boutros Harb proposal to ban the transfer of land between communities), an unpopular dictatorship in Iraq and an attitude of malignant neutrality in Egypt. Others (Aflak, Saadeh, Habache etc.) have instead ventured out in force onto the broader Arab hinterland shedding their religious identity or leaving it aside as they challenged social and religious dogmas responsible for centuries of stagnation and foreign dominations. It is the failure of the common efforts of the latter to establish an alternative nationalist or humanistic bond to replace the strict Islamic one that can be directly linked to the situation that Arab Christians find themselves in. Obviously it is not, and never was, their responsibility to enlighten the Arab world. It is their status as a minority and their later relatively privileged position under western mandate that placed them at the forefront of Arab reform.
That reform effort has now clearly failed and on most significant indicators the Arab world is socially, religiously and politically in a state of flux from which radical forces, but also undemocratic governments and Western interests are benefiting. It is not as a community that Arab Christians should be responding to the attacks of Al-Qaeda and various brands of fundamentalists, it is as individuals firmly requesting from those who govern them their human right to live, love, pray (or not for that matter) and finally die in this land. It is also as individuals that Arab Muslims should be standing against terrorism, bigotry and social oppression whether it affects them directly or not. This fight should not be about the Crescent and the Cross coming together or about brotherhood across a religious divide... and yes I am critical of the slogans and imagery that appeared on Facebook, which reminded me of the pacifist marches that took place in the early years of the Lebanese civil war and were always followed by another round of sectarian killing. This fight should be about rational Egyptian, Lebanese and Iraqi citizens finally realising that it is time to resuscitate the reformation project on a national and regional level. New mechanisms suited to this century are needed and nostalgia for the era of charismatic leaders and enthusiastic revolutionaries should not prevent serious introspection and productive self criticism. Solely blaming the Western media or the Zionist conspiracy for the nation’s sorry state of affairs no longer convinces even those who utter them like parrots. I personally have had enough of the fears and the tears. The time has come to galvanize!