Lebanon: The Clash of Narratives 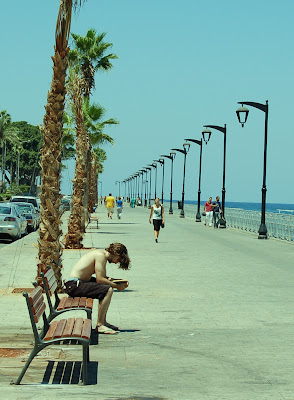 If the leaked New TV Hariri recordings reveal anything, it is the extent of the rift between the Lebanese. Since 2005, two narratives have evolved in parallel with no intersection points, even during periods of intense crisis or external aggression, such as in July 2006. Given any political development, half the country is almost guaranteed to reach an opposite interpretation and draw different conclusions from the other half. Concomitantly there is a dehumanising process in full motion of the other, initially the politician belonging to the other camp, but which is rapidly extending to the ordinary supporter or member of a religious sect. Lebanon is not alien to this process, which mirrors the sequence of events from the late 1960s and the growing conflict around the Palestinian resistance and culminated with the non-discriminatory sectarian killings of 1976. It is not unusual to hear in a Beirut salon the total denigration of Hariri as morally corrupt in pervasive sense of the word: financially, politically and...Sexually. In another salon, Michel Aoun, who gathers the unwavering support of a significant constituency among the Maronite Christian population, is called a ‘nutter’ with references to a supposed mental imbalance and psychiatric illness. There are very few individuals capable of escaping this narrow-minded classification of all things Lebanese into two camps: March 8th and March 14th, Pro-resistance and anti-Hezbollah, pro- Iranian and pro-American, in essence Good and Evil (not in any particular order).
Even the latest events in Tunis were adopted by both camps as a vindication of their respective struggles. Those excitable elements within the March 14th forces that still believe in a democratic offensive led by the US department of State (or the Pentagon when the former falters) twinned it with their Cedar revolution. In their enthusiasm they omitted to mention the admiration that French and American administrations held for the Ben Ali regime until he made the request to land his plane in Paris-CDG en route to exile. Their counterparts in the pro-Resistance camp saw it as an extension of their anti-imperialist struggle against all things foreign while happily gathering support from other undemocratic Middle Eastern regimes in Iran, Syria and Qatar. Many tried to draw more intelligent comparisons between the two developing stories in Beirut and Tunis with little success. Yes both countries are part of the Arab league and marred by corruption, foreign influence and underdevelopment but Tunisia is a country with a homogenous population and no minorities. Its recent involvement in the Israeli-Arab struggle has been an emotional one and its importance in the geo-strategic quagmire of the Middle East is peripheral. Lebanon is by all measures a more complicated affair. The most obvious question would be which Lebanon would have to rise up and against which heads of state?
I get asked a lot about my solutions for the Lebanese problem, given that I spent a significant amount of time lamenting the absence of a political movement able to challenge the structural flaws in the Lebanese system. I still believe that bold grass-root work motivated by clear democratic, secular and socially responsible principles would be a winning formula. Interestingly, one element that could explain the success in toppling the regime in Tunis is the presence of an active secular left-leaning opposition with influence within the middle classes. The Islamist movement, although active, did not appear to have taken a leading role in the uprising. I might be wrong and the days to come will reveal the full picture.

I think you might have a problem with me rather than my blog. And the cheap shot at my profession reveals ignorance and narrow-mindedness.

I think I am entitled to my opinions, that are generally well informed (you can read some of my old posts and see see for yourself whether I do have a point or not), given that I have been more or less interested or involved in Lebanese politics for many years.

You are also entitled not to read what I write and agree with less pretentious opinions elsewhere. There are plenty of them around.

ps: If you want to have a constructive debate don't assume an anonymous identity and stick to useful comments.

of course you are entitled to your opinions, but there's a difference between "in my opinion the solution is...", or "suggesting an alternative solution" and "MY solution".

It is not a problem with you or your opinion, it's just that everyone thinks that his solution, his opinion is the one. Most probably it's a lebanese thing not your profession.

I thought that the content and not the identity of the person that makes a debate constructive. But it's only my opinion...

The sentence shoud be read: 'I get asked a lot about my solutions for the Lebanese problem, given that I spent a significant amount of time lamenting the absence of a political movement able to challenge the structural flaws in the Lebanese system.' There is no MY as you suggest. arabdemocracy was not dedigned to be a personal blog and has always included other countributors. The purpose is to engage others in a debate and yes the style is often provocative but this is intended to be.

As for the Lebanese being individualistic and maybe pretentious. I agree. but then, I prefer to hear their opinions translated one day into action rather than leaving the country's fate to the Qataris, the Turks, The French, The Iranians, The Israelis not forgetting the myriad of Western analysts and bloggers with influencial opinion on the Middle East.

Yes you can blame me for thinking that my opinion as an expat socially and politically involved doctor is pretentious. Then whose isnt?

And I still havnt heard what you think of what I say in my post.