‘Influencing each other’: Arab Democracy and America 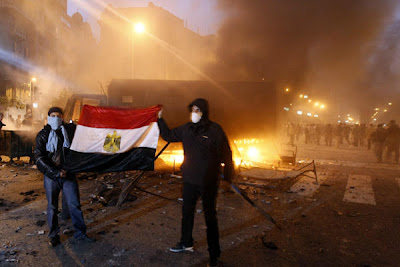 Dear jad,
I am inclined to disagree with your reading of the US administration's position as being a product of conflicting policies between WH and State both reaching out to the public and giving mixed messages.
I believe that the US was surprised with the uprising and its genuine diversity and clear slogans to the extent of being "cornered". The regime is their ally and a necessity in their scheme in the region. Changing Mubarak should be done their way and according to their agenda. The uprising messed it all up but they had no choice at the first few days but to support, ESP that the movement was still strong and the blunders of the regime were massive.
BUT, when Mubarak regained initiative in the second week and came out of the shock and started the dialogue with the opposition, the Americans were relieved and went dormant! They thought he could make it!
And when the masses insisted on staying in the midane and refused dialogue and exposed the bluff, and mubarak could not follow up with them, the Americans dumped him again to keep face and build trust with the people.
I believe the American admin was fixed to the tv screens between their press releases and releasing accordingly…
Miss you
Rami Abou Alfa

I know that most people agree with you. And i see where they're coming from, of course (i am often there myself).

But i must admit to you that being where i am right now gives me a totally different perspective:
you regularly meet, in person, the policymakers that you are talking about. Not only do you have the total freedom to raise any criticism or question with them (all off-the-record), but they also are yearning to hear your critical voice because they are becoming increasingly aware of their goofiness in the region.

Take a minute to sincerely (really) try to imagine those two following scenarios.

Imagine for a second Obama and his advisors sitting in that room and discussing what to do.

Scenario 1 they are saying:
'you know what, i don't want those egyptians to have their freedom, i don't trust the result. I don't think they are capable of handling it anyway, and besides, watch my words, we're going to end up in serious trouble with Israel and saudi arabia and it's going to be a whole mess. Is there a way we can keep that old dictator in place while we find a younger one"?

or, conversely, scenario 2:
"Man did you see that! people no matter where, no matter how, find their way to freedom. it's impressive, isn't it? but it's also scary, let's get to work. i mean, we don't know who will arise form this mess. how can we help those guys achieve their damn long deserved freedom but without this thing turning into another middle eastern catastrophe with terror and Qassams falling all over Israeli roofs? can we do this? is there a way through which those guys can achieve their freedom without necessarily sinking the whole area in chaos?"

I think it's the second scenario.
Because i believe that people prefer to do good things whenever they can.
And if you are in that room at the end of that last question, and you know how to give an answer that does not include "imperialist hegemonist" and that does not last for more than 5 minutes, you can actually give them the answer that they need.

My point, simply, is that your opinion is heavily affected by distrust (justified distrust, granted) and disbelief in any genuine good intent.
But the facts themselves don't 'prove' one interpretation or the other. if you give the benefit of the doubt to Obama & co, than you read their actions differently. if you don't, than you read it like you did.

It's subjective. and that's fine.
but it's definitely not productive. it won't make anything better (maybe more 'bitter', but definitely not better).
I want to see things change. and i think they can.
But for that one has to first give people the benefit of the doubt. And guess what: when i did, i was always amazed by how much influence i could have on their way of thinking...

you should try it!

You are giving them more than they deserve! Look at them now in the case of Libya , they are adopting which scenario? They haven't even mentioned the word democracy in their press releases, only worries on violence. Pathetic! Wait till the people say their word in the streets and watch your friends in the oval office sprinting to catch up. It is all about state interests (oil in this case) and they don't give a sh-- about values. They are selling us words and you are urging us to Consume. Am happy for you being this close to these policy makers but hold your grips a little....

In your 2 very naive scenarios, you make it sound as if "people's freedom" is of paramount importance to the US administration... is that the case?
Think Libya, Tunisia, Bahrain...

I think it is rather their own agenda in the region...

I cant express my delight at seeing Kamal and Rami comment on AD. First time ever. So we should ask you to write more often Jade.

I am nost sure whether it is you or your perspective that brings on the debate.

I tend to agree with their opinion on this matter.

This is not really about intentions or ideals, although these guys might be well intentioned. This is about realpolitik. And if anything the Obama administration is less idealistic than the Neo-cons that preceded them. (They had a vision..it was the wrong one but still a vision.)

On the other hand, Obama has shown an inability to lift the veil of hypocrisy that has characterised the US relationship with these regimes.


The US is interested in 3 parameters in the region: Energy security (Oil), Israel's security and its own security (Terrorism).

And I can almost guarantee that they will put every effort to keep the stability in Tunisia, Egypt and Libya....at the expense of democracy.