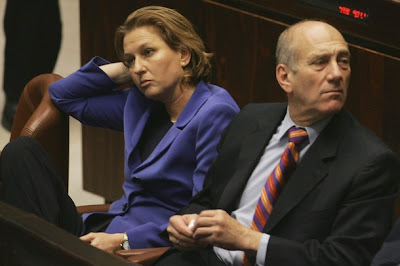 When Tzipi appeared on our screens, as the Israeli war machine pounded Lebanon in July 2006, we knew she would be destined for great things. The woman fitted the profile of a future Prime Minister of Israel as long as the conditions were right. These conditions soon became reality with the leadership failures of her boss Ehud Olmert. The Arab press headlines focused on the fact that Tzipi was a woman placing her name next to that of Golda Meir, the only other woman to have occupied the post between 1969 and 1974.Golda Meir was only the third woman in the world to lead a country. In 2008, this is no longer exciting except in our misogynistic Arab world and the similarities between the two ladies are hard to find. A first generation immigrant Meir had been a lifelong militant of the Left, climbing the ranks of the Histadrut (Labour Union) and the Labour party to become chairman. It is in this capacity that she replaced Levi Eshkol who died a sudden death while in office. When she became Prime minister in 1969, Meir was 70 and at the culmination of her political career. Born in Tel Aviv in 1958, Tzipi Livni is 50 but looks 45. Her first elected post as a member of Knesset for the Likud Party was in 1999. Her major break came in 2005 with the establishment of the Kadima Party by Ariel Sharon. She was appointed foreign minister by default in 2006 but following 8 years of tribulations on the Centre-Right of Israeli politics she still has a lot to prove. A popular Israeli blogger recently mocked her lack of experience in an article titled ‘Tzipi Livni’s achievements’. Superficially, her record so far reveals a combination of hard rhetoric and pragmatic discourse, depending on the audience. Having narrowly defeated Shaul Mofaz, her focus will be on the nearing elections with tough competition from Ehud Barak and Benjamin Netanyahu, both seasoned politicians with a hawkish image favoured by a brainwashed and paranoid Israeli public. Even if she gets elected at that stage the road ahead is littered with obstacles. Golda will always be most remembered in the Arab street for authorising the targeted assassination of leading Palestinian figures in reprisal to the Black September attack at the Munich 1972 Olympics and for leading Israel through the Yom Kippur war in 1973. What will be the inexperienced Tzipi’s legacy? More settlements and another round of confrontation with Hezbollah or the return of the peace process?