December Blog of the Month: Echoes of Western Sahara 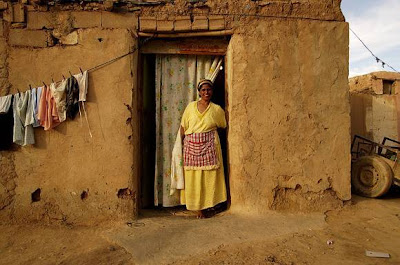 I have long held a fascination with the Polisario front although not necessarily connected to the cause of Western Sahara. I must have wondered, watching the news report in the 1980s, who these people were, fighting a guerrilla war in some remote desert under a Spanish acronym (Polisario stands for Frente Popular Por La Liberacion De Saguia ElHamra y Rio De Oro)? I had to find out for myself since we were not told at school that in this corner of the Maghreb, a territory the size of Portugal, was in contention between Arabs. The history of the region, officially a ‘non-self governing territory ‘ since the 1960s according to the United Nations, differs depending on who you talk to. The facts remain that the Polisario, which seems to embody the aspirations of most of the Sahrawi population, has been around since 1973. Originally designed in the traditional fashion of national liberation movements of that era, the organisation confronted Spanish Colonialism until it ended in 1975. This was followed by a bloody war (1976-1991) and Moroccan occupation with accusations of human rights abuse on both sides. Since the mid-nineties, a tense status quo has prevailed reflecting the end of the cold war and the realignment of the national interests of major regional players (Algeria, Morocco, and Mauritania). For the Moroccan government, who enjoys noticeable popular support on this issue, the ‘Southern Provinces’ are an integral part of the Kingdom and little flexibility is allowed. Negotiations with the provisional government of the Sahrawi Arab Democratic Republic (SADR) have stalled ever since. In the meantime thousands of refugees linger in camps in Algeria while others find themselves forced exiles in Europe and the US. Incidentally some of them keep their aspirations alive through blogging.
Finding a consistently good blog on Western Sahara is challenging. Many blog inconsistently, posting only in reactions to major related events, such as the McDonalds controversy early December. Others use Spanish primarily or adopt a propagandist style that would put off anyone but the most hardened supporters of the movement. Another category includes Westerners interested or familiar with the Western Sahrawi cause. Among the blogs, http://sahara-panorama.blogspot.com/ stands out. Publishing in English and Arabic, Mohamed Brahim claims on his profile to blog from the area since 2006. The blog is simply designed welcoming you with a soundtrack of traditional Sahrawi music. Although there is very little personal material, his posts consist of mostly factually oriented reports (supported by photographic evidence) on cases of human rights abuse with an emphasis on the effects of the Moroccan ‘oppression and occupation’. The blog also contains various analysis and opinions from mostly reliable International sources, providing any interested party with a comprehensive view of recent developments. You will also find a number of interesting videos on Sahrawi art and culture and history.
For finally satisfying my curiosity on this forgotten conflict I have chosen http://sahara-panorama.blogspot.com/ as the December blog of the month.
For other interesting bloggers on the Western Sahara also visit http://w-sahara.blogspot.com/ and http://freeewesternsahara.blogspot.com/
Arabdemocracy

I’d sweetie to squealer that too!