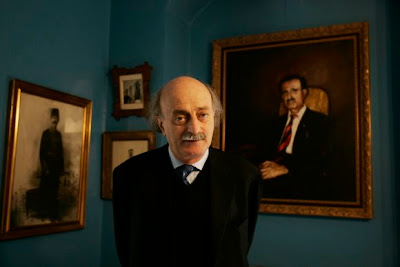 Walid Joumblatt is the archetypal Lebanese politician. Born in an illustrious feudal dynasty, he also inherited a political mantle following the assassination of his father in 1977 in the form of the Progressive Socialist Party (PSP). As is frequently the case in this scenario, the son of the ‘Mouallem’ had little to prove to his followers to gain their loyalty, which he has since retained. In addition, Joumblatt’s recognition has an international dimension, since his formation is an integral member of the Socialist International. The fact that socialism and progressive ideals are as alien to him as vodka to a Mollah do not seem to bother his International friends, who are happy to accept that the Druze sect is THE progressive element within Lebanon. Clearly Papandreou (Greek President of the Socialist International) and co are yet to visit Moukhtara, where the Beyk will have to work hard to convince them of the Lebanese flavour of socialism. But all the above confusion can be forgiven in the ill defined ideological spectrum of the Levant where brands and labels are often mere excuses to create a political party when one is needed. What is more worrying is the trend for the Beyk to change his mind again, and again....and again.

Walid Joumblatt changes him mind over crucial and essential matters. He does it unexpectedly, publicly and frequently offends. The task of damage limitation is then carried out by one his side-kicks (most recently Mr Rami Rayess), who will explain, justify and sometimes go as far as apologise. The Beyk’s status will remain undiminshed among his people, since Lebanon does not operate in an age of modern accountability. Objections to style or content will remain contained within the Druze family. The ‘cool’, liberal and cultured lord of the mountain can certainly engage you in stimulating debates, but in politics his behaviour is a reminder of the times when the fate of entire nations where decided according to the whims of Emperors and the mood swings of Monarchs. Mr Joumblatt might be an astute reader of regional and international shifts in the balance of power but his accumulation of faux pas over the past few months is quickly becoming indefensible. This might be a unusual opportunity to request from a politician that he refrains from speaking his mind.
Building on months of conflicting signals to his revolutionary partners (in reference to the so-called Cedar Revolution),his latest suggestion to revive the 2005 Sunni-Shiite-Druze alliance (also known as quadripartite alliance) has infuriated Christian politicians, who have basically been asked to tone down their infantile bickering while the grownups do business. The message could not have been heard louder within a Christian community paranoid over its fate and vulnerable to radicalisation. The sad fact is that Jumblatt is correct: In an ultra-sectarian Lebanon, the weakened Christians have a choice to either remain quiet or become pawns in a conflict opposing the Sunnis and Shiites, and in regional terms the Saudi-Egyptian axis vs. the Syro-Iranian one. Their prominence in the electoral period has quickly subsided since the nomination of Hariri to the post of prime Minister. In an interesting twist of events, and probably at the behest of his seasoned advisors, the latter is seeking to recreate the conditions that surrounded the golden age of his father’s reign on the Lebanese scene in the late 1990s. In this context a rapprochement with the Syrian regime is inevitable at the cost of breaking up the March 14th Alliance, which remains to be consumed in full. The Beyk finding himself in an uncomfortable position has found no better option than to recycle old tunes of Arab Nationalism and anti-Imperialism. His less than convincing turn-around has less to do with the Palestinian cause than to deflect attention from his own flirtations with pro-Americanism. Nonetheless his statements will offend and tempt the Christians into further isolationism.

At a time of an emerging Sami Gemayel, a steadfast Michel Aoun and a resurgent Samir Geagea, Walid Jumblatt can be credited with ensuring that the future of Maronite politics is anything but progressive.

Dear Joseph,
Thanks for an informative insight into Mr. Jumblatts political acrobatics.

Lebanon's basic dilemma is in its election law. That the Lebanese Shi’ites, around 40% of the population, share 21% of the parliamentary seats, while Christians, roughly 35% of the population, enjoy 50% of the parliamentary seats make Shi’ite men and women as if they were lesser voting beings than Christian men and women. Under such conditions, it is easy to see why the Lebanese model of governance is fraught with danger, a model not conducive to long-term peaceful sectarian co-existence. In the modern age of human-rights consciousness, Lebanon’s discriminatory election law borders on being a form of apartheid. As the Shi’ite proportion of the population increases, given the higher growth rates of Shi’ite families than Lebanon’s other groups, the already capricious balance of power in Beirut will become even more unstable. It will only be a matter of time before the Shi’ite majority will demand a discarding of the Taif Accord and insist on a system of periodic census-taking, along with a one-person one-vote election law applied equally to every citizen who is resident in the country and subject to paying taxes. Otherwise, Lebanon’s civil unrest would eventually erupt, yet again.

I don't see how Junblatt's flip-flops can be blamed for Maronite isolationism, more than Druze isolationism being blamed at Shiite and Sunni tribalism.

Each and every leader in Lebanon holds roughly the same responsibility, because they all operate within the same frame, to achieve the same goals, using the same means.

Hariri's support for fundamentalists, and Hizbulla's war against liberal Shiites, the sickening language of Maronite politicians from both ends of the spectrum, and Junblatt's own hypocrisy are all the same recycled shit that is Lebanese politics.

Now Joseph, the question that always bugged me was, are there any true seculars in Lebanon? Everyone I meet when I am there, seems to be an ardent believer in the reform of this pathetic excuse for a political structure, but they all end up using the same paraphrases that their "supposed" opponents use.

Are there? Where are they? In a country that is "2ad kess al-3a2rbeh" (excuse the vulgar expression) and of 3 million people, with relatively free media and free will to meet and move and organize, how are they not organized? how are they not even a small power to reckon with?

That's the real question, because if they're not, then why the hell do we question them leaders?

Elie and Yazan, thanks for your comments.

I agree with Elie that, in the absence of a radical reform of the system,we are heading to at best a state of perpetual tension or full blown intersectarian confrontation.

This topic is worthy of another article in itself but there is no doubt that the Shiia community is no longer happy to be lumped in with the Sunnis in terms of representation. The Lebanese equation of a Muslim and Christian partnership is no longer valid. The Sunni+Shiaa+Christian formula is upon us with all its complications.

The first to blame for Maronite isolationism are the Maronite politicians themselves and the sectarian system they have defended against all odds for decades. I picked on Jumblatt this time around because of his misplaced frankness while he repositions himself in panic.

For the absence of true secularists, you only need to follow the excellent editorials by Nasri el Sayegh in Assafir to get the bleak picture.

The natural secularists are on the left. They are divided, lacking in enthusiasm and creativity, stuck in the 70s for some while the others scavenge for a role with either March 14th or March 8th. The people you speak to Yazan ultimately have themselves to blame. The 'intellectual left' is satisfied with its mostly parasitic role while it abandons any real political ambition.

The sectarian forces will not reform the system and hand it over to the secularists. The latter will have to fight for it.Alas, you can get them to talk to each other at this stage.