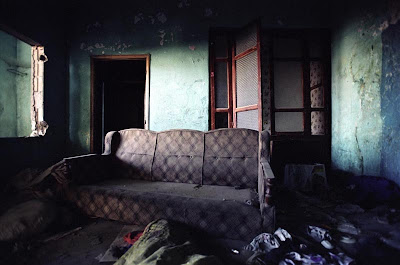 Through a random succession of events I ended up at Dalia Khamissy’s presentation of her work in a Central London basement Last Thursday. Dalia’s talk was part of photo-forum, a monthly meeting of London based photographers. The setup was informal and the atmosphere generally friendly and supportive. Dalia was last to speak, preceded by Two British photographers whose personal work revolved around the theme of England and the English. Their work was inspiring and though provoking. The contrast between their romanticised views of a peaceful England could not contrast more sharply with what followed. It felt like the equivalent of switching your TV dial from BBC4 to Al-Jazeera without blinking. Dalia suitably prepared the crowd for the switch, apologising in advance for dampening the mood. And in fact carried out by emotion, she went on to apologise again at a later stage, when it was probably unwarranted. All in all, she presented 3 sets of pictures related to 2 past series and an ongoing project.
Her first series consisted of pictures taken in the year that followed the 30 day war that swept through South Lebanon in July 2006. For a second, Dalia struggled in introducing the theme to an unknown Western audience comfortably eating crisps in the dark. Was that an Israeli aggression, a Lebanese-Israeli war or a conflict between Hezbollah and the IDF on Lebanese soil? Ultimately, she stuck to basics and introduced the facts: 2 soldiers kidnapped on the border, Israeli bombardments and I shot the result. Dalia focused on a narrow but essential aspect of the devastation by shooting pictures of the inside of village dwellings that sustained significant destruction. Now open air exhibits and mostly gutted out these living rooms nonetheless retain some elements (sofas, chairs, phones, carpets)that remind us of their previous function as someone’s living space, intensely private and personal. The sometimes uncomfortable sensation of voyeurism is offset by an excellent use of lighting and colours with predominance for the Green walls so common across Lebanese villages.
Voyeurism, unavoidable in decent photojournalism, is also present in her second, and in my opinion, most personal series. As she explained to the audience, in 2004 Dalia spent a number of weeks within a refugee camps set up on the Iraqi-Jordanian borders. This self funded initiative allowed her to spend the time necessary to make herself as inconspicuous as possible, connecting at every level with the refugees; a group of Iraqis, Palestinians and Kurds displaced by the events in Iraq. Her Black and White pictures are high contrast, reflecting the scorching conditions in one of the hottest places on earth. Interestingly, it is not so much sadness that is projected in her portraits, rather a mixture of resignation and disappointment.
Her final 3 photos, part of an ongoing project is original both in its concept and in its design. She managed to explain in a few sentences the complexities of Lebanese citizenship law, which denies women from passing on their nationality to their foreign husbands and their common children. Having passed that hurdle, she wowed them with 3 separate portraits of 3 women dominating a living room, with husbands and children thrown in out of focus. The universality of the theme is emphasised by the choice of households from a range of social and religious background. The discussion overran and the chair forced us to wrap up but I am hopeful that Dalia’s conceptual creativity and technical ability were well received by this tough to please London crowd.

Dalia keeps on apologizing and she does such fantastic work! She has an AMAZING series of photographs of guys wrestling (catch I believe) in Beit Jbeil, right after the July 06 aggression. Surreal! Gorgeous B&W photos. She's always on the run, adventurous, courageous. Chapeau Dalia!