The Thing About Ziad Baroud 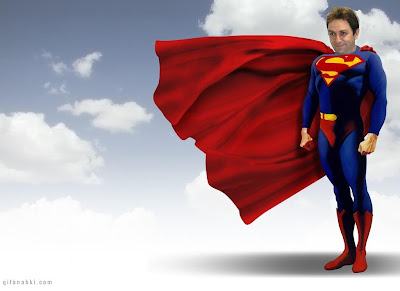 I resisted the urge to join the Ziad Baroud’s fan club on Facebook as I generally believe in supporting ideas rather than individuals in position of authority; although I have to say I came close to praising him in private as the saviour of our otherwise decrepit republic.
Understandably at least 25000 of my compatriots appreciate the interior minister. In excess of 20 Facebook groups are dedicated to showing appreciation to his performance and his policies, with one group of 40 members from both sexes declaring him’ very cute!!’
The thing about Ziad Baroud is that he is unremarkable in so many ways. He is not particularly charismatic; he speaks in a funny accent and is rather technical in his approach. I suspect that these unthreatening ‘qualities’ were at least partly behind him getting the job in the first place, sponsored by President Suleiman. While the Maronite scene is buzzing with young aspiring scions of political families, this young minister from Kesrwan went about his business, delivering an exceptionally well organised election process in the most challenging of conditions. Navigating carefully between a sceptical majority and a suspicious opposition, he kept his public interventions succinct and to the point. Nevertheless, judging from his long history of activism within civil society, the man is not lacking in opinions and has made his views clear on a number of issues relating to citizenship and human rights.
His term in office can be described as the highlight of the previous government, dwarfing the gesticulations of a Gebran Bassil and the posturing of a Mohammad Shatah. Unfortunately the bipolarity that the Lebanese revel in leaves little space for conscientious ministers like him. We hear rumours that he will not be returned to his post or to another one, amidst competition for the interior ministry between the Future movement of Hariri and Aoun’s Free Patriotic Movement.
In the absence of a civil and political movement to embrace these secular upright characters, we remain in a situation where fan clubs are created and poems recited to this rare phenomenon in post-Taef Lebanon. I fear a time where Ziad Baroud keyholders become fashion accessories and a dedicated museum is attracting crowds to his hometown of Jeita.
Beyond the irony, I pity a country that idolises a civil servant for doing his job.

concerning the 2afleh, I personally pity a country that worships its civil servants and other public figures for doing the contrary of their job.

Your last statement is somehow optimistic with regards to the reality on the ground!

i dont understand what the point of this post is, joseph. what *is* the thing about ziad baroud?

The point is that there is no 'thing' about him. He is just doing his job.The job that he is paid and entrusted to do by the Lebanese people.

But given the standards we have for politicians in Lebanon,his profile has been raised to that of a hero.

I am very supportive of the man but I am questioning the way we approach governance in the Middle East, which should be less about indidividuals and more about systems and a collective culture.

I do agree that Ziad Baroud is a "Nice" person. Nice… what a tasteless word!
He did his Job…? Who knows… his performance did not out-way by much the one of the corrupt Ms. Mur or Sabi3 for that matter… (All conducted successful elections)
So, for sure he did nothing… bad.
Do not misunderstand me… I do like this “Nice” guy… but alas being “Nice” does not cut it out in the political arena or in a corruption stricken country… it does maybe in NGOs…
What saddens me is that many “Petite Bourgeoisies” in our country appreciate tasteless (as nice and good as they are) well spoken and non confrontational people… It is a sign of a tired fear stricken nation!

I like the saying, when its too good to be true, it usually is. But I guess sometimes it may seem as such, but we go with it anyway, because if we were to be merely pessimistic and synical, then we will remain in our vicious circle of Lebanese corruption. Some positivism is good, he is just doing his job, but maybe more of our ministers need to start doing the same. If he is to be a poster boy, then so be it. (I am hoping he is not a paper tiger or a 21st century media mogul pulling a berlusconi).

Our people, in all stratas of society need individual leaders to be sheep for. Life's like that in Lebanon. If baroud gets us were we need to go, then I'd be happy to go "baaaaahh".

I dont agree with the attitude that the Lebanese are a bunch of sheep in need for direction.That is pessimism. I am not a sheep, I am pretty certain you dont consider yourself one and we both know hundreds whow have similar ambitions for our country.

Iconising Baroud is like iconising Guevara (on a smaller scale of course) A lazy get away clause from thinking hard and coming up with creative solutions.

I am for Baroud and past and present hard working ministers (George Corm, Ghassan Salameh etc.) but as part of a solid and militant reformist movement.

On a practical level, why dont you remind me of the official 14th March position towards Baroud. Are they supporting his return to the Interior Ministry?

We both know the answer to that one.

I dont consider myself a sheep. I was merely referring to the demonstrations and counterdemonstrations that were sadly exploited and politicized.

At the beginning, I felt proud being one of those demonstrators, at later stages, I felt used......

Of course you would feel used. But going through this experience is part of maturing and growing up in politics.

Everyone is been through it. The problem arises if you are still caught up in it 10 years down the line.

Yawn...! Your articles are so tedious and condescending. What happened to the other contributors?

That's what I call a low key contribution.

I wonder why you feel the need to comment here when you can easily find your excitment elsewhere.

Which contributors do you miss so we can let them know of their fan club?