Are we Obsessed with Michel Aoun? 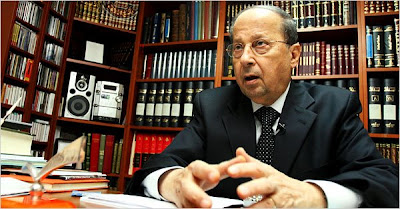 The idea for this piece came to me following a number of accusations levelled at writers on this blog but also more generally at anyone who criticises or opposes the general. At the risk of sounding pedantic I will remind our readers that obsession, clinically, is not a term to be used lightly. In fact it is a very specific type of thought characterised by discomfort, involuntary recurrence and the generation of anxiety if resisted. So, apart from exceptional clinical cases, I suspect that neither supporters nor opponents of the general are ‘obsessed’ with him; a better word would be ‘preoccupied’. This preoccupation is built around the notion that he is central to events currently shaping the country’s future.
Indeed Aoun has worked hard to place himself at the centre of political developments between 1988 and 1990 then again since his return from exile in 2005. Love him or loathe him, the general has already reserved his place in Lebanese history. This over personalisation, not uncommon in Lebanese politics (Bachir Gemayel, Moussa El Sadr and more recently Rafik Hariri and Hassan Nasrallah) has become the norm over the past few years. In my discussions with his supporters I am left with the impression that they regard him as a guiding light and a father figure. Poems addressed or dedicated to him on the Tayyar’s website also reveal a messianic adoration among a hardcore group of believers. But these facts tell us more about sections of the Christian community than it does about Aoun, although interestingly he has not attempted to discourage this type of behaviour. To the contrary, his interaction with his subordinates reveals an omnipotent chieftain who prefers to surround himself with courtesans rather than cultivate an atmosphere of critical accountability within his own party. The Free Patriotic Movement (FPM) seems to operate democratically among the lower and middle echelons with Aoun’s leadership immune from normal organisational processes. In adopting, by choice or otherwise, this model of absolute enlightened leadership for himself he should also readily accept the drawbacks; for every personal praise will be mirrored by a personal attack.
Among the March 14th Media, the online NowLebanon has proved itself particularly virulent in its personal attacks, despite a veneer of editorial sophistication. Concerned by the general’s appeal among large sections of the population, particularly women and the youth, the unashamedly pro-American website launched a systematic campaign aimed at damaging Aoun’s image. In January of this year they released a lengthy report rich in facts and figures, illustrated with fancy charts and colourful photography that claimed to inform the public about the Free Patriotic Movement and its leader. The report had a limited distribution and more importantly did not reach its intended audience, those who were least likely to turn to NowLebanon for information. Objectively the report was a departure from the usual cheap rhetoric and an attempt at providing quantifiable evidence of one’s argument. If true, the revelations clearly established that Michel Aoun and his inner circle were no different from those they sought to overthrow. Alas, the trend was short-lived. Soon after, a number of writers from various related publications resorted again to the lyrical use of expressions such as ‘madness’ and ‘mental instability’ to describe the general’s behaviour. Not satisfied with lay local opinions on the subject matter they recently enlisted the help of a certain French psychoanalyst who writes for a commercial publication in Nice (France) and is sold to us as an ‘expert’ on Lebanon. In an exclusive, the analyst Jean Luc Vannier was asked to comment on a video clip released by the FPM following the latest Lebanese elections. Through the skilled use of Psychoanalytical Jargon, Vannier masks what is essentially a misleading political opinion rather than a scientific one. Aoun is described as bordering on the ‘psychotic’ and suffering from a ‘megalomaniac delusion’. While I question its use to explain Aoun the man, the video itself is worth commenting on. It draws absurd and simplistic parallels between various historical figures (Marie Curie, Mahatma Ghandi) that, misunderstood for many years, made exceptional contributions to the human experience. Among this already random mix emerges a Michel Aoun opposed by the small minded and the ignorant. The makers of the film could be suspected of ‘psychosis’ only if Robert Fisk had not drawn similar parallels between Aoun, Ahmadinajjad and Kaddafi in an Independent article during the Iranian election crisis. Scale and proportionality are lacking in both examples.
Personally, I might object to the general’s behaviour, positions and discourse but I am radically against the cheap use of mental illness and irrationality to make up for weak political arguments. Whether Michel Aoun is mad or irrational is irrelevant when he commands the respect and loyalty of millions. Indeed if he was to be proven mad one day, his opponents should bury their heads in shame for having failed, in their rationality, to defeat the general in the hearts and minds of many Lebanese.