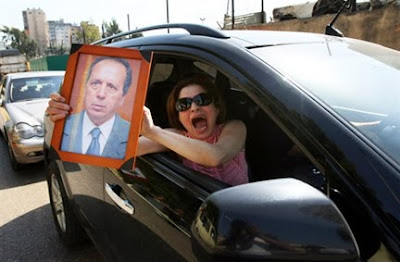 Jameel El-Sayyed may have the right to be angry if he was indeed framed for the assassination of Rafik Hariri. He has the right to express his anger in private and in public while seeking appropriate retribution through legal means; a process he had anyway initiated through Syrian courts.
What is less acceptable is for him to turn his vendetta into the main flashpoint for further conflict on the Lebanese scene. His unrelentless confrontational campaign to drag humiliating concessions out of Hariri  can only lead to one outcome: further sectarian bloodshed. General Sayyed is no Hugo Chavez and will not be spontaneously carried on the shoulders of jubilant youths whatever the efforts of Hezbollah and their compromised allies.  His adoption of of a Mother Theresa stance while he claims the status of 'special victim' to the 'special tribunal' is of bad taste at best.  He accuses his tormentors of the 'political use of the judiciary' when no individual symbolised the paranoia of the post-war years (1991-2005) better than him. His name was synonym with the style of intimidation and manipulation nurtured by the Syrian apparatus in Lebanon. 'Having Coffee with Sayyed' or one of his subordinates was understood by every Lebanese as one invitation to avoid...if at all possible.
Now on a personal level, I have reached a point where I am no longer least interested in who did kill Hariri. How could I, when his own son exonerated the same people he initially accused; when the proceedings are yet to produce any results; when the credibility of most witnesses has been questionned and when numerous gratuitous killings have marred the last 5 years without any significant manifestation of justice.  The responsibility for the confusion generated by the tribunal should be equally placed at the doors of the ineffective PR machine attached to it and the incredible stupidity of the March 14th sycophants bankrolled by Hariri who have failed miserably at projecting a consistent message to the Lebanese public. These same characters now specialise in the exchange of vile language with the likes of Kandeel, Wahhab and Michel Samaha.
The heightened anxiety is now over the future of the country amidst growing signs of an unbridgeable Sunni-Shiite rift. The Christian figures' main role is one of surrogates when things get too heated and the need to reestablish a semblance of political legitimacy for the hatred is acutely felt. Their absence from the recent efforts at calming the tension, which exclusively involved Berri and Jumblatt is the latest sign of a waning influence over the course of events. This state of affairs seems to have been best picked up on by Suleiman Frangieh who is determined to rebrand himself as a moderator with the hope of emerging as a safety raft for the Christian community in the face of looming regional monsoons.
All in all a bleak picture for the months to come. Unless for a radical regional shake-up, we might soon reminisce with affection over the days of the Pax Syriana and 'coffee with Sayyed'.

Very good analysis, particularly on the confusion of 14th March. The main point as you mentioned elsewhere is not to become cynical about politics because of this. We should come up with the alternative.

Thanks for the comment. I have just read your piece which tackles the current situation from a different perspective. I am maybe more pessimistic over the possibility of things gettin worse in the short to medium term. Nonetheless we reach the same conclusion. That we (along with others)are mere observers and that time has come to not be satisfied with asking the right questions but moving to coming up with solutions.

"Now on a personal level, I have reached a point where I am no longer least interested in who did kill Hariri." I agree with you, the political mumbo-jumbo around the assassination drove our interest away from the criminal-legal aspect of the investigation. However, what I am still very much interested in, is pointing the people, groups or states who have been using since 1977 political assassinations in Lebanon as a means to fulfill their political aims.

I agree Camille. The emotional connection is lost partly because it was used and abused initially by the Hariri clan. But in terms of identifying the culprits in order to prevent further assassaination, this is essential. My fear is that we are unlikely to have an outcome this time around.