Sects and the City 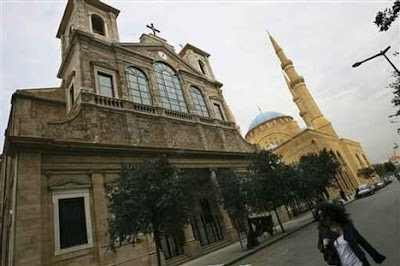 By Karl Sharro
Republished with permission from Karlremarks


In my post ‘Hariri / Hezbollah: in search of a new division of labour’ I argued that the climate of fear being created in Lebanon today is a noisy background for the upcoming deal that will seal a power-sharing arrangement between the main political camps under a renewed Syrian patronage. I closed that post by saying ‘we, as always, remain as spectators in all of this.’ This isn’t a call for disengagement and cynicism about politics; on the contrary it’s a call for the Lebanese people to reject all the secret deals being made without our participation. But how can we express our political will in this crucial period as we watch the blatant abdication of responsibility by Lebanese leaders?
Firstly, we need to recognise that our current predicament is a product of our inability to banish sectarianism from our political interactions. Sectarianism is not a secondary feature of the Lebanese political system; it’s the main constituent that manifests itself in confessional arrangements. And five years on from the ‘Cedar Revolution’ we need to recognise that the events that followed it have contributed to the strengthening of sectarian leaderships.
It might have seemed at the time that seeing Samir Geagea and Walid Jumblatt together meant that we’ve opened a new chapter in our history. Far from it, the alliances that were created after the assassination of Hariri were explicitly set up as coalitions between sectarian groups. This is as true of the Geagea – Hariri alliance as it is of the Aoun – Hezbollah front. The cumulative effect of all those sectarian arranged marriages was a further erosion of any potential for secular politics. It’s not by coincidence that the assassinations that followed targeted some of the leaders that did not have sectarian affiliations.
Given the centrality and importance of Beirut to national politics, it has increasingly become the main battleground for sectarian confrontations. I don’t mean by that only the skirmishes in ‘mixed’ areas such as the Burj Abi Haidar incident, but the whole range of political manifestations starting with the March 8th and 14th demonstrations to the Riad El-Solh camp to May 7 events. It’s time that we see all those events for what they were: displays of the sectarian power struggles that further eroded any possibility of national unity.
Today we are astoundingly still being asked to choose between the two camps that have contrived to create and sustain a poisonous atmosphere of mistrust and animosity over the past five years. In other words, we are being asked to contribute to our own self-destruction and supply the fuel for the battles that precede settlements between sectarian leaders. Isn’t it time that we reject those offers for assisted suicide?
As a reader observed on my previous post, we should learn the lessons of our history of power-sharing arrangements which had devastating consequences at every juncture. She reminds us that the nation came into being in 1943 on the back of such an arrangement and set a precedent that still prevails until today. She however chose to close with a pessimistic message: “In the midst of this turmoil I prefer to stick to this anecdotal rule -- better bear the repercussions of a divorce rather than live in a household of quarrelling parents.”
But I would rather be optimistic, there’s no point to politics otherwise. Had I been a fan of political theatre, I would have called for us to marsh on Beirut and protest against the cynical attempts at creating an atmosphere of fear and against the deal that will be agreed without our approval. This would be one way to reclaim Beirut and challenge the sectarian hold over our national politics. But I fear that the sectarian machines are much more adept and prepared for those mass displays than the rest of us.
The end of this era of Lebanon’s history is an opportunity to develop alternative forms of politics that are grounded in secularism and aspirations not sectarianism and fear. But while we organise and prepare for that, we should realise that any choices we make between the two camps are inevitably choices between sectarian coalitions. Let’s start by rejecting the calls to choose the least disagreeable option. And, for God’s sake, let’s stop believing the fear scenarios that come straight out of 50s B-movies. You have my personal guarantee; there aren’t 3000 members of Hezbollah with ‘long beards and long nails’ hiding in chalets in Christian areas.