The Pastor, the Book and the President 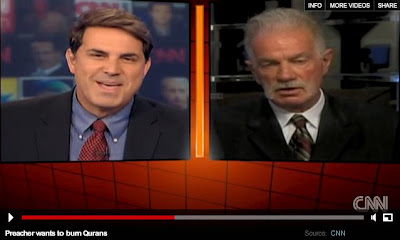 On 18th November 1978, a 'Pastor Jones', Jim Jones this time, led 909 indiviudals to their death, by self-poisoning in the jungle of Guyana. These events shook the US and raised questions over the danger of extreme religious cults and the risk of them drifting into tragedy. But America is America and religious freedoms are sacro-saints, except maybe when it involves a Muslim praying centre in the vicinity of the World Trade Centre site.
In 2010, a Pastor Terry Jones, who manages to get 50 people to attend his sermons on a good day (12 on a bad day), made the headlines around the world as he threatened to burn the Koran in public. It prompted reactions from Western leaders, calls for the Catholic pope to interfere and then negotiations involving a muslim cleric who turned up at the site of the 'Dove World Outreach Centre' and smiled uncomfortably in front of makeshift banners cursing his religion. The US President looked even more uncomfortable as he spoke sheepishly to Terry Jones through the media asking him ro refrain from carrying out his threat.
And Threat it is! While maybe not an act of violence in itself, the burning of a book deemed Holy by millions across the world at a time of conflict of tension carries in it an inherent symbolic violence and the potential for the loss of lives through international repercussions, as highlighted by Gen. David Petraeus.
Many commentators have questionned how such an insignificant, most likely unstable character, managed to effectively hold the world at ransom. The answer is multilayered  and once scrutinised Terry Jones and his group become irrelevant. Successive US administrations have failed to engage the 'other' effectively and to inform their own public of the nuances in Islam. The media, right wing or other, have built a paranoid vision of a world populated by unruly barbarians with a completely separate set of values inconsistent with the modern world.  There has been no shift in the understanding of long-held grievances in the Arab-Israeli conflict. The Israeli perspective is still accepted as fact in the circles of power and arguably beyond them. Iraq and Afghanistan figure in the American unconscious as dirty smelly deserts where 'our boys' get killed by faceless terrorists. In essence, Samuel Huntington's clash of civilisations has been manufactured where it failed to materialise spontaneously.
On the other hand, The main tool in Terry Jones's new found influence is the risk of indiscriminate violence from some Muslim fundamentalists in response to his action. These groups maintain a firm grasp over the imagery associated with Islam and that is projected to the rest of the world. Their resorting to violence at the first hint of an external insult to their belief system seems tolerable or at least excusable to many moderate Muslims (See the Cartoon affair a few years back). Many fearing the repercussions branded Jones a 'Zionist' who is  deliberately trying to create a rift between Islam and Christianity. This type of rationalisation is unhelpful as it again gives political weight to the  action of an eccentric individual and shifts the blame onto a third party. The responsibility on Muslims to also try and understand the place that such man has in the so called Christian realm is brushed aside. Some raised the question: Would the Catholics threaten mass murder in response to the burning of the Bible. A fringe element might consider and act upon justifiable anger and outrage but the wider community would reject it outright.  This discrepancy shows that Muslim societies are yet to confront their own demons but the politico-religious leadership is lacking in the context of internal divisions and the use of devoutness as an indicator of righteousness in an otherwise bleak social, economical and political horizon.
The Terry Jones affair is not yet closed. The risk of copycat behaviour is highly likely and the blackmailing of an already embattled Obama can only herald the return of an intolerant America that never really went away. Jones should be allowed to burn any books he likes in his backyard with his group of misfits and suffer whatever consequences in this life or the other. This should have never become an issue for the rest of us. Unfortunately we are now past that point.

Email ThisBlogThis!Share to TwitterShare to FacebookShare to Pinterest
Labels: Joseph El-Khoury, society, US