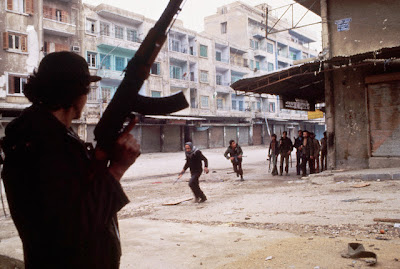 On the 6th anniversary of the March 14th 2005 demonstration that led to the formation of the eponymous movement, a range of speakers reminded the crowds of the apparent threat that Hezbollah poses to the Lebanese entity. It is clear that a well organized, grassroots supported, religiously based quasi-fascist militia is incompatible with the concept of a secular democratic state, to which all claim to aspire. The trouble is that, far from being merely an Iranian import, Hezbollah is just another natural product of the Lebanese system to which these speakers belong. Hezbollah today is no different from what the Christian Lebanese Forces and the Druze PSP were during the civil war (i.e. well organized, grassroots supported, religiously based quasi-fascist militias). In fact the Shiaa Islamist movement today is the "highest" form of self-sufficient structure that all sects aspire to. Hariri’s Future Movement itself clumsily and rather unsuccessfully attempted to emulate that model between 2006 and that fateful day in May 2008. For decades now and the sectarian system engenders and nurtures these structures because effectively it its message to the people is: "look, you belong to sect X, so go agree on a leader among your own people, then our leaders will talk to your leaders and sort it out"!
Ironically, is that the propagandists in the March 14 camp are playing precisely into Hizbollah's hands with their new ad campaign and their rolled up sleeves attitude. This could be for one of three reasons:
1) They only care about reinforcing their own support base, which has been slowly eroding. So, they want to preach to the converted whom they fear may have lost faith or simply got tired and scared.
2) They are an incompetent bunch who don't understand the current prevailing political psychology of the Shia community.
3) They are actively seeking a confrontation as part of a yet unclear strategy.
Obviously a combination of the above is not to be ruled out.
The bottom line is, as we have repeated in the past, the current confrontation is part of a positive feedback loop that the sects use to essentially regenerate the system that serves them as political entities in the first place. The one thing that may be a game changer this time around is that the balance of power (and we don't just mean military) has shifted so far in one direction that dramatic events may be on the horizon. At this stage all what Hezbollah seems to be successfully capable of engineering is Shia political autonomy. The ‘La Ayre’ counter-campaign, which politely translates as “Couldn’t give a toss” typically exemplifies that state of mind.
The questions now are: How far is the day when the temptation of a full blown take-over is simply too great to resist, and what would be the consequences?

A lot of very valid ideas!

I don't agree with everything (especially the Hezbollah as a self-sufficient organization. It does get 100Millions$ per month from Iran), but you're right about something, the cost of a full blown Hezbollah takeover is going down day by day. This is especially true in-light of the Shiite-Sunnite confrontation going on in Bahrain.

That said, there is another factor you did not add to the analysis: Syria. What is the cost for Syria of a Hezbollah takeover?

My analysis was - and still is- Syria wants things to go to the extreme, so it can impose what it always wanted: a constitutional change in Lebanon. This new regime should allow it to play the referee between Shiites and Sunnites without having any "direct" military force in Lebanon.

I am writng an article on that, I will share it with ArabDemocracy readers once i stop being lazy :)