Syria: from keystone to cornerstone 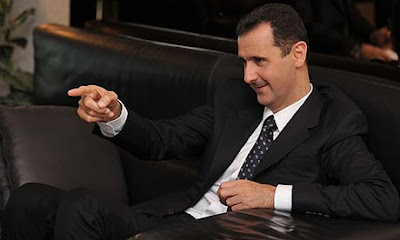 You might dislike President Bachar el Assad but he is ironically the best-positioned person to steer a non-sectarian transition to democracy in Syria and the Arab world.
If there is anything we learned from the incredible cataclysm in the Middle East, it’s the following: the quest for freedom and dignity is a) universal and b) inevitable. Democracy - the natural offspring of this quest - can be postponed by oppression but it eventually strikes back… sometimes with a vengeance.
And this is precisely the problem.
As a young Lebanese political activist, I have seen first-hand how brutal the Syrian regime can get. It has managed to survive for twenty-five years by oppressing its people with an efficiency that the Stasi would have envied.
Among other techniques, being a member of the Alawite minority ruling over a Sunni majority, Assad’s father used the imposition of a secular state to protect his rule. In 1982, he went as far as bombarding Hamah – much like Gadhafi indented to do – killing 10,000 people in order to repress a conservative Sunni rebellion.
There is a real risk that today’s uprising against the Syrian regime converges into a vengeance against the secular state altogether. Much of the revolts taking place in Syria now are not lead by Tahrir Square-like modern youth, but by orthodox Sunni activists who are pursuing an embedded sectarian agenda. Will the young Assad use comparable violence to repress today’s Sunni rebels?
I doubt he will: he too learned from Egypt and Libya. But this puts us in a dilemma:
What if the success of these protesters leads to the breakout of a radicalized sectarian discourse in Syria? Will this favor true Arab democracy?
Let me be clear, I do not discount the legitimacy of the protester’s action, nor do I plead for the continuation of repression in any shape or form. But I do think that there is a real need, and a real chance, for a third way in Syria.
This third way lies in the hands of President Assad alone.
Bachar El Assad is a young potential reformer who has not (yet) been able to overcome the established authoritarian apparatus he inherited from his father. Despite early attempts, he was first forced to concede to the ways of a rigid and powerful establishment, with which he eventually became too comfortable. But the uprising in Tunisia and Egypt was a game-changer that made the Syrian regime face its unsustainability and provided the reformist instincts of the president with the tangible arguments he needed to counter his own establishment - and hesitation.
The young president has enough political capital with the majority of the Syrian people to propose a third way and stand up to both extremes – authoritarian apparatchiks and regressive Sunni conservatives. Indeed, the Syrian people need their President to lead them towards democracy without having to endure the havoc they are dreadfully observing around them.
As he attempts to find his way to democracy, however, the increased internal and external pressure might put president Assad on the defense again, preventing any ‘orderly transition’.
Two things need to happen for such a transition to still strive:
First, President Assad has to resolutely decide to implement radical democratic reforms without further delays or excuses. This carries a significant but inescapable risk: democracy would give a platform to both divisive sectarian movements and the separatist Kurdish one, which may complicate the building of a truly secular democratic state by undermining his agenda. Still, the president has to take this risk.
Second Assad needs to be accommodated by the international community who will have to choose to stand by him, not against him. To this extent, western policymakers will have to understand that a modern and democratizing Syria does not necessarily mean a pro-western, anti-Iranian Syria. Indeed, the west often confuses long-term interests with short-term politics: a democratic Syria is highly contagious to its neighborhood and could pretty quickly favor similar evolutions in Iran – let alone depriving it from a crucial ally. A democratic Syria, however, will not change it’s stance on the Palestinian-Israeli conflict and should not be required to do so in return of western support of democratization. The west has to learn to accept democracies with which it disagrees: Syria is a good place to start.
If we dare to hope that the concerned leaders will act wisely, President Assad could reform his own pivotal autocratic regime, therefore removing a keystone from a shaking Middle Eastern order. He would, instead, turn Syria into the cornerstone of a new emancipated, sovereign and democratic Arab world.

The argument of "He is young, smiley, ,shinny and really want to fix the government but he is not allowed to do so by the old guard" is getting very old. It's pretty amazing to me that people still give this president the benefit of the doubt. After eleven years of his presidency we really haven't seen any major change, and when it comes to it, this regime have no problems killing 50 Syrians in one day because they decided to exercise their "constitutional" rights. Instigating the sectarian fears especially among minorities is a game the regime has perfected, so I hope you don't buy into it as well. This regime hasn't changed much from the days of Hafez, still ruthless, criminal and ready to do whatever it takes for its survival.

"If we dare to hope that the concerned leaders will act wisely, President Assad could reform his own pivotal autocratic regime"
That sounds like A Midsummer Night's Dream, why would he do so now knowing that he could do whatever he wants including killing almost 300 of his people in one week and get away for it.
Don't let the packaging fool you, What we are looking at my friend is more of the same if not worse, and viva la revolucion

I agree with the above comment and do not think that the regime has within it what it takes to reform. Imagine a true opposition making Assad accountable. The Perestroika experience is where the similarities are. It is Reform and Perish as well as Reform or Perish.

I can agree with both of you. I meant the article as an expression of what i hope he'll do, not necessarily what i predict he'll do. I don't dare predicting in these times.

As for perestroika, i totally agree on the comparison, but take it one step further:
If you are Assad, and you have the choice between perishing as a reformer or perishing as a dictator, which way will you choose?

- reform and perish: at least you are not assassinated or taken to courts. furthermore, if you do it to the extreme (radical auto-putch, in favor of democracy), you might be remembered as a hero later.
- reform or perish: times are clear, it WILL be reform. but in this case, you'll perish brutally. not so attractive perspective.

I still hope he wakes up, be it only out of fear...

thanks for comments anyway.

It seems Assad himself commented on this article by his lamest speech ever! Assad, the "young potential reformer who has not (yet) been able to overcome the established authoritarian apparatus he inherited from his father", declared today that reform is last on his mind and that it is equivalent to The Conspiracy on Syria!
A lot of misconceptions /readings/ aspirations... were filling the air in the past weeks and employed in set political adgendas such as:

First: that the egyptian revolution was against Camp David treaty and against the regime's position from israel and the US. False; the voices coming out from Egypt in this respect were very limited and scarce.
Second: that the regime will fall in both Tunisia and Egypt and the islamists will take over.false; they didnt, at least they are waiting till the democratic elections to run for the parliament.
Mind you that these cliches were propagated by the regimes themselves in order to waver any change, and the same applies to Syria.
This article bases its argument on the supposition that the orthodox sunni will lead to the breakout of a radicalized sectarian discourse in Syria! Who says they can? who says they are really as widespread to do so? i believe that this threat is what Assad counts on to stay in power in the current fashion without even hinting to political reform.

Back to the priciples: one should refuse a forced & oppressive secular rule to the same extent of refusing any forced and oppressive sectarian one.
I only hope the syrian people would freely choose to hold onto the secular nature of their state once this regime changes or gets changed.
rami