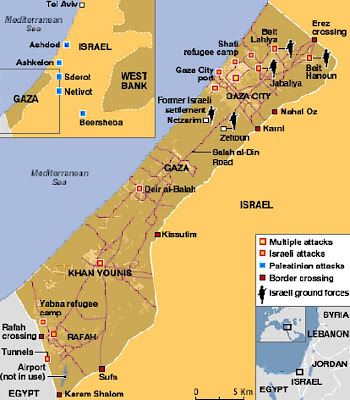 Source: BBC Website/Middle East
The relationship between ‘warbloggers’ and journalists is precisely not a peaceful one. It is often caricatured - with some reason - as the encounter of frustrated failed journalists with professional ones jealous of their privileges. Donald Matheson and Stuart Allan** in a chapter entitled ‘War Zone: The Role of Warblogs in Iraq’ are thinking about the collaboration between what they call mediasphere and blogosphere. They say that blogs cannot be separated from the mediasphere to which they respond. In the case of the recent war on Gaza, it seems on the contrary, that the blogosphere was an impulse of news and the main source of information. Matheson and Allan’s model, which was applied to the 2003 invasion of Irak, could clearly be inverted as far as the 2008 Gaza offensive is considered.

Their main conclusion is still valid though:
‘the dominant model of the foreign war correspondent, developed during the relatively information-scarce nineteenth-century, relied upon the correspondent having a monopoly of information and the status of an expert by dint of being present on foreign soil and having general journalistic skills. Such a model becomes less tenable when news editors and readers have instant access to multiple voices, both journalist and lay, experiencing the news event in question from an array of perspectives in multiple locations.’ Matheson, Allan (2007, p.87)

Some of these multiple voices are put together on Global Voices, a platform started by the Berkman Centre for Internet and Society at the Harvard Law School. Ethan Zuckerman and Rebecca MacKinnon founded this valuable meeting point in 2004. Four years later, it became a central independent resource for anyone interested in listening others’ voices. MacKinnon told the BBC: ‘If bloggers are out there creating media and talking about things that the mainstream media isn't covering, that may also help push the mainstream media to recognise that there are a lot of things out there that people care about that they've simply failed to cover.’***

From Gaza, with Love is a blog - created on Blogspot - by Mona Al-Farrah, a physician and human rights activist who actually was in Egypt while the bombings started. Her messages revealed though an authentic voice, transmitting directly in the blogosphere the news she received from her friends, before they got into the mediasphere. At least, when they eventually reached it. She was giving her phone number in case someone - journalists? - would like to speak with her. Mohammed Fares Al Majdalawi, film maker and social worker in Gaza strip, published a post on Mona’s blog (4/01/2008): ‘There is a horror in every minute (...) I have two message to the world, (...) to the lovers of peace and freedom in the world. First message: Imagine your life with no electricity, destroyed homes, missiles night and day, no food. Imagine your children and your family telling you they are afraid of the missiles (...) My second message: End the siege and stop the killings, stop the demolitions of our houses.’ ****

The lack of professional mediacy might be considered as an evidence of bias. Technically, however, the blogger is making himself available by putting his mobile phone number online, at the end of his post. Any journalist or any simple reader is invited to check the facts. Many bloggers like Mohammed kept writing, as far as they got an internet access. Hopefully, the mediasphere - not entirely - echoed the cries and stories of the blogosphere. Al Jazeera English, from Gaza, had a Twitter feed which gave the general public an opportunity to follow - and check - the news almost at the same time as a new post was published.

Passing through both mediasphere and blogosphere is a way for the audience to get really involved in the news process instead of absorbing passively the crumbs delivered by mainstream media. It is a chance for professional journalists to share a conversation with this sort of active public, as well as with non-professional writers and witnesses. It is worthwhile noticing how Al Jazeera English, at some point, realized the perfect combination between blogosphere and mediasphere through an experimental platform called ‘War On Gaza. Experimental Beta’. On this website, a map was available and accidents could be submitted through the site, Twitter and mobile phones (SMS). Then, they were checked and possibly validated.

In conclusion, ‘truth in a war zone’ does not depend anymore on the monopoly of information by foreign correspondents. It is more likely a dialogue between an active blogosphere and a open mediasphere that values the intelligence of its audience by putting it in the centre of the news process - in a shared rationality.

I recently came across your blog and have been reading along. I thought I would leave my first comment. I don't know what to say except that I have enjoyed reading. Nice blog. I will keep visiting this blog very often.

I recently came accross your blog and have been reading along. I thought I would leave my first comment. I dont know what to say except that I have enjoyed reading. Nice blog. I will keep visiting this blog very often.