March 14 and the Reproduction of the Corrupted System 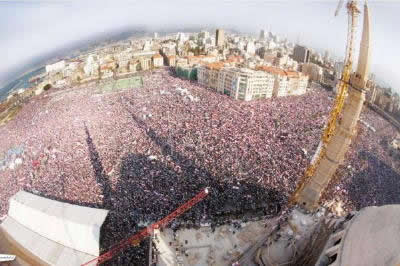 Since 2005, the 14th of March stopped being a normal date. This day booked a prominent place on the Lebanese political calendar. A date remembered in different ways each and every year. Whether it is to celebrate it as an event that opened “a new glorious chapter” of our History (for its contribution to the withdrawal of the Syrian army from the country after three decades of controversial presence), or to criticize it as a pro-Western opportunistic moment that has not added any value to the Lebanese political life, this day holds an important place at least because of the debate it instigates.

Unlike 2006/7/8, March 14, 2009 is more related to the one of 2005 even if the political context and alliances are hardly comparable. However, same as in 2005, the country is heading towards legislative elections Lebanese leaders describe as crucial or vital and some even dare pretending that the future of Lebanon depends on them.

The illusion of a radical rupture with the past vanished in 2005 with the emergence of the “four party alliance”: an opportunistic electoral understanding between the pro Syrian Amal movement and Hezbollah, and the fresh anti Syrian Future movement of Hariri and the Socialist Party of Walid Jumblat.

Back in 2005, this alliance cornered the Free Patriotic Movement of General Michel Aoun despite the role this party played in organizing and mobilizing for the so called “Cedar Revolution”. The electoral invoice of this action was sent to the 14th of March leaders by the Christian electorate who, by counter reaction, voted massively for Aoun, winner of nearly 70% of the Christian vote.

Aoun’s strong mandate liberated him from his former alliances, and gave him the freedom to build new ones, that appeared to be with the hardliner pro Syrian camp and specifically Hezbollah.

In that sense, and because it is now clear that the Christian vote direction will decide the outcome of the whole electoral process, 2009 is comparable to 2005. But while in 2005 it was a spontaneous referendum on the behavior of the “fresh anti Syrian camp” in the Christian areas, it will be in 2009 a referendum that will determine whether the Christian electorate approves the Aoun – hardliner pro Syrians alliance.

Even if the coming elections are important, they are not as crucial as some pretend. July 2009 will not determine the identity of Lebanon, because an identity change will only occur by creating a real rupture with the past, which is not yet the case since the Lebanese political class is busy preserving the sectarian system while the real need is to change it or at least structurally reforming it.

Lebanon missed a golden opportunity in 2005 by running away from creating a new momentum powered by the strong popular mandate Lebanese citizens gave to the notion of Change when they took the streets on the 14th of March. The Lebanese political class and specifically the March 14 camp ignored calls from architects of the Cedar Revolution, who urged them to initiate an “Uprising Within the Uprising, or in other terms, an uprising against ourselves”*.

But the message was not heard, “yesterday’s revolutionaries” preferred giving more credit to the sectarian system, and whatever the outcome of the 2009 elections, the conclusion will be nothing but a “top-up” to the lifeline of the corrupted confessional system, with a semblance of a lifetime guarantee for Nabih Berry as Speaker of Parliament.

To add to your words Bachir I think that whatever the elections result it will be followed by another 'national disunity government' where everyone is represented. The country in the current constitutional framework cannot be governed, it can only be managed...but for how long?

http://www.hmocpc.com/ - discount viagra
After the patient has taken the pill, Sildenafil citrate then enters the bloodstream.
[url=http://www.hmocpc.com/]viagra sildenafil[/url]
People who suffer from erectile dysfunction are not confident enough to go to a doctor to discuss their condition.
viagra pills
It then builds up and then lets the arteries in the penis become fully expanded.