Lebanon: Back to Reality 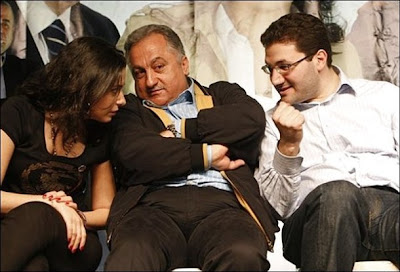 Day+5 for the much hyped Lebanese elections and it is probably time to move on to more important things: The Iranian elections, the swine flu epidemic looming on us and the Formula 1 racing championship. 5 days were sufficient to dampen the euphoria of the winners, who rejoiced at having burst the (orange) bubble for the losers. It is now sinking in the minds of everyone that we have again a problem on our hand. We still have a majority that will be unable to rule faced with a militant and armed ‘virtual minority’ that pretty much encompasses 90% of the Shiite community and roughly half the Christians. Nabih Berri is due to be returned in post while questions are being asked about the make-up of the future government and its margin of manoeuvre. In an attempt to set the tone for the months to come, numbers are being crunched and manipulated as if part of a sick game of ‘Twister’:
- If you don’t count the Armenians, relegated to pariah status, solely for behaving like every other sect (I.e. like a pack of wolves gathering under one leadership), the 14th March alliance represents 58% of those Christians who voted.
-This is irrelevant to Mr Hassan Fadlallah, Hezbollah MP, who was quick to smugly remark that opposition to his party was virtually inexistent within his own sect. What the Christians get up to is ultimately a side show in the party’s argument with the revitalised Sunnis.
-Obsessed with pan-Arabism for decades, these seem to have turned into the ‘active arm of the American/Zionist plan in the near east’, settling the Palestinians and undermining the Resistance. How else could you explain the defeat of all time long Arab Nationalist, Mr Osama Saad in favour of Mr Siniora in Saida?
-This is at least according to Michel Aoun, who while thanking the 300.000 who voted for his side, found it appropriate to draw a comparison between the Shiaa scarf, apparently easier on the eye, and the Sunni hijab. The General went on to accuse everyone who hadn’t voted for him of having succumbed to money, intimidation and paranoia. It never crossed his mind that maybe his patronising and aggressive attitude is repulsive to tens of thousands of decent citizens, who do not deserve to be insulted for merely supporting other parties.
-Dr Fares Souaid, who started his career as the rational heir to a well know political family, has since forgotten the analytical flair supposedly provided by his medical training. While blaming his defeat on the Shiaa in his district of Jbeil, he failed to draw a comparison with Zahle, where his allies were helped to victory by a consistent strong Sunni vote. What goes around comes around I’m afraid.
And the list goes on... mixing flawed scientific analysis with populist propaganda. The fact is that everyone got together in Doha and set the rules of the games, knowing very well that their choice of electoral law was unlikely to generate reform (true reform, not the variety embodied by the alliance of the same name). In theory everyone should now accept the results of what was a free and organised electoral process by third world standards. But this is forgetting the sectarian framework regulating the balance of power in the country, which unless tackled head on will reproduce itself like a hydra. Last Sunday’s results should be a wake-up call to a generation that is discovering the power of numbers. Voting might be a first step but is not sufficient in a struggling country like Lebanon. Change will only come at the expense of new blood coming into the political sphere, participating, challenging and asking tough questions within political parties and in other spheres of activism. Otherwise we should shut up and accept that the future of Lebanese politics lies with Nayla Tueini and Nadim Gemayel.