The Peasant and the Student: Iran in the eyes of the West 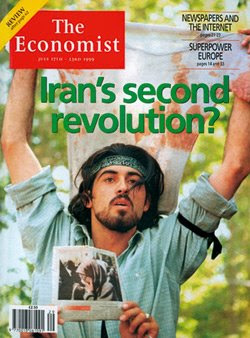 Just wondering…
“Iran’s Revolution” or “Iran’s Summer Breeze”? This debate has been going on in the western press for the last week. Is Iran heading towards a change of regime or is it just a “very unusual” event that will “eventually die down”.
I will publish later in the week a detailed report with numbers and data on how the Western and Arab media are viewing this “Revolutionary/Summer Breeze”; but first results suggest that the western press is actually divided on another matter:
Is the Iranian split between Ahmadinejad and Moussavi’s supporters, social or religious based?
It seems that US press is focusing on the religious divide between “fundamentalists” (Ahmadinejad supporters) and “reformists” (Moussavi), whereas European media prefers to talk about the clashes between “students” (Moussavi) vs. “rural” Iranians (Ahmadinejad), thus hinting at a socio/economic divide.
Some sources are mixing both visions, assuming that if you are a “student”, you must be a “reformist”, whereas “rural peasants” are surely fundamentalists…
If the western media is right, then if you ever meet a fundamentalist bearded student fighting it out with a clean-shaved reformist peasant; then you’d better either buy a new pair of glasses, or call your psychiatrist.

You might find this commentary by a left-wing Iranian-American academic interesting. The gist of it is that there's no basis for the common assumption that affluent/urban=pro-Mousavi & poor/rural=pro-Ahmadinejad.

Thanks for the link.

It is interesting that this same dichotomy was used by some in the European Left to justify their support for the Hezbollah led alliance in the Lebanese internal struggle.

Their assumptions were no less unfounded.

I agree...We should boycott Israel. But the boycott will leave its impact only when the Muslim Ummah will be united against Israel.Its our dilemma that we are always pulling down ourselves instead of promoting our deen in the world...
Google...