In defence of elitism: the American University of Beirut 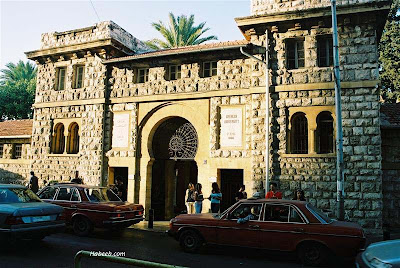 Published with permission from Karlremarks

I was amused to read this philistine attack on the American University of Beirut by Jana Nakhal in Al-Akhbar newspaper, The AUB and Beirut: One Side Love. Nakhal, 'an urban-planning engineer' (sic), subjects the AUB to a shrill anti-colonial examination uncovering it in the process as an 'accelerating factor in the popular acceptance of colonial ideas, tastes and concepts'. (Presumably things like engineering, medicine and architecture which colonialism forced us to accept).

Nakhal is upset that the AUB seems to be cut-off from its urban context and is not interested in having any meaningful interaction with the areas that surround it. Its students apparently impose their tastes on the areas around and 'take nothing in return'. The proof? None of the students pick up the distinctive local accent of the area! The irony of course is when the AUB was established in 1866, the neighbourhoods around did not even exist. The construction of the university campus in what was then a forested area sparked off the urban development of the neighbouring areas.

The wall that surrounds the campus irks Nakhal, it is a physical barrier between the university and the city but, aside from security, the wall has an important symbolic role. It marks a space that is dedicated for learning and the pursuit of knowledge and one in which a different set of rules apply. This separation does not imply lack of concern for the preoccupations of the city dwellers but it creates a distance necessary for critical examination.

Higher education thrives on challenging students’ assumptions and worldviews and on providing them with the critical tools to develop their own thinking and ideas. The contemporary obsession with relevance self-reinforcement is patronising and ultimately counter-productive. Nakhal is echoing not only this contemporary bias but also a certain mindset in Lebanon and the Arab world that is deeply suspicious of ‘alien’ ideas. This rhetoric has traditionally relied on pseudo-Marxist and anti-colonial ideas to justify the insecurity brought about by exposure to modernity at the end of Ottoman rule.

I was not surprised then that Nakhal quoted Frantz Fanon to expose the AUB as the guardian of imperial values: ‘The colonial-bourgeois thinkers in universities persistently uphold essential Western values’. I am not quite sure what those values are, but I think she might be talking about Western concepts like gravity and the laws of thermo-dynamics. They always sounded suspiciously ethno-centric to me. It’s also amusing to hear the resonance of Radio Moscow in the mindless repetition of words like ‘bourgeois’ and ‘colonial’, but let’s not forget that Al-Akhbar’s dedication to the cause of international revolution dictates certain stylistic preferences.

But why the AUB and why now? Why subject the most successful academic institution in Lebanon to this rabid attack? The AUB throve despite severely adverse conditions because of its independence and its dedication to excellence and academic rigour. It works precisely because it was not swallowed up by the Lebanese system and because it managed to fend off the intrusions of the Lebanese ‘groups’ and their lumpish presence. It is elitist in the best sense of the word, creating a space for critical thinking and debate that thousands have enjoyed and benefited from.

Back in the early 90s when I was a student at the AUB, I had to watch the sad spectacle of the great historian Kamal Salibi being rudely forced out of his class by an Amal movement ‘operative’ who was a constant presence on campus. That, and the many assassination and kidnappings that took place on campus, was the consequence of subjecting the AUB to the power of the Lebanese ‘people’ or the thugs that represent them at any rate. Salibi’s fault was that he wasn’t sufficiently moved by whatever grievance that Amal deemed we must all commemorate to stop his class.

But Nakhal seems to be oblivious to this troubled history; if the AUB doesn’t embrace Uncle Deek then it’s committing a sin against our folk. She is particularly affronted that an AUB student mispronounces ‘keshek’, that staple of Lebanese diet that embodies our identity and our customs. I was reminded of the diatribe at the end of Ziad Rahbani’s Shi Fashel in which the folklore creature chides the Lebanese for their sentimental attachment to their traditions and rejection of modernity. Ziad’s sentiments are of course unapologetic: he is against the backwardness represented by this sentimental attachment to our rural past.

Three decades later, Nakhal wants us to embrace this backward heritage and undermine the independence of our greatest seat of learning. Time to celebrate the keshek.

Nakhal seems to forget that some of most prominent Arab nationalists of the 20th century were AUB graduates. I don't hear anyone calling George Habash a colonialist stooge.