How Omar Bakri Insulted My Mother 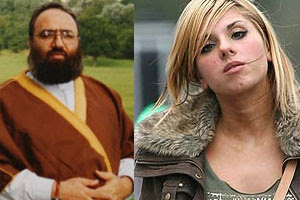 Omar Bakri is a character. You have to give the man credit for making headlines at least as frequently as Britney Spears. His recipe is a mastery of insult and a sense of drama unrivalled in the circle of deluded radical fundamentalist clerics that also includes Abu Hamza and Abu Qattada. So when the British tabloid 'The SUN' (which shares a lot with Mr Bakri in terms of style) revealed that his 27 year old estranged daughter Yasmin Fostok was leading a grossly unislamic lifestyle, he responded with... more insults.

In a public retaliation to the revelations, he at first feigned ignorance of the whereabouts of his daughter, forced into an unhappy marriage to a Turkish man a few years ago, and the fact she had performed as an adult entertainer at venues in England and the Middle East. He then turned around, in a display of incongruous fatherly loyalty to claim that pole-dancing (and related activities) was a lesser evil in the divine eye than being a non-Muslim. In that context, my own poor mother seems to have definitely made the wrong choices in life. Now, I have to apologise to all those decent pole-dancers out there, as I have nothing against the profession as long as it involves consenting adults free of coercion. I will also apologise to Yasmin, as she is probably a much better company than her father. Having no direct link to Mr Bakri’s god or any other, I am unable to deny his claim. But common sense would dictate that for a religious fanatic obsessed with any display of female flesh, rubbing yourself against a pole in skimpy underwear would score significantly high on the ‘sin chart’, practically barring you from the gates of heaven. Or is Mr Bakri suggesting that converting to Islam trumps any behaviour, liberating women from the duty of wearing a veil and various oppressive measures imposed by his likes? I am usually uncomfortable with Omar and his colleagues, who insist on behaving like real-life ogres, being given air time. But on this occasion I find it necessary to comment on this masquerade that has gone one for too long and has been used by right-wing media to tarnish an entire religion and a culture (In the same SUN article, the writer makes the link with Abu Hamza’ son being a rubbish collector).

Repeatedly, the West has been accused of hypocrisy and double-double standard in their dealings with the Middle East. These accusations are well founded and at the source of the mistrust of the US and its allies among Arab masses. On the other hand there is no less hypocrisy in the way Muslim societies are turning a blind eye to the insulting words emanating from within their midst. It is no use calling Bakri and his associates an insignificant minority, as a short tour of the comments made on sites such as Elaph, Aljazeera and other Arab web outlets will reveal hatred, bigotry and ignorance beyond understanding. As Edmund Burke puts it so elegantly “The only thing necessary for the triumph of evil is for good men to do nothing”.

Joseph, what u did write is amazing... I can not say anything more but, even I am atheist, from muslim backround, I feel that my mother who is a muslim too (am sure she does not agree with Mr Fostk) is insulted too! So, let s have revenge! Wael

And what should the good men do in this regard do?

Tell these people off to start with and assert the liberal Arab viewpoint!