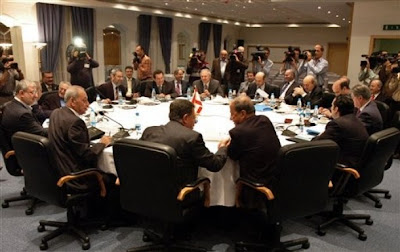 Just imagine the Lebanese Council of Ministers meetings in a Reality TV Show Format. A compromise between ‘Big Brother’ and ‘Star Academy’ that could run all the way until the 2009 elections. Except for the female eye candy, all the ingredients are provided for popcorn entertainment. It would be presented by Marcel Ghanem and May Chidiac. A phone-in voting competition would certainly spice things up and increase youth interest in the political process. I say political process because Lebanese youth consider themselve already politicized. They certainly swear allegiance to one or the other faction before they are old enough to have a girlfriend. But you would only consider them politicized if you were also of the view that ‘Rambo’ is a political drama. The audience (18 and above) would vote out the least popular minister at every meeting. President Suleiman would be excluded for fear of damaging his pristine image. The voting pattern would follow confessional lines with Khaled Kabbani securing the majority of the votes in Tarik Jedide and Mohammad Fneish dominating in Dahye. As a consequence the first to go would be representatives of minority sects: The Armenians, the Greek Catholics and Talal Arslan, unless they manage to come up with unlikely popular proposals. Since accountability remains an alien concept in that part of the world, they could propose 24 hour electricity, reduced mobile phone tariffs or reclaiming the Lebanese coast as state property open to all. Once the voting over they would deny having promised anything. Walid Joumblatt would be accused of back stabbing, manipulation and inconsistency to which he would respond by ‘So What...I am only playing the game!’. Elias Murr would maintain a low profile until forced to make his views clear in the Diary Room. Jean Ogassapian would be voted out unintentionally, many majority supporters confusing him with Alain Tabourian. Ali Qanso would be disqualified for threatening to execute his fellow ministers over minor disagreements. 28 weeks later Ziad Baroud would emerge a clear winner as the most popular minister while Jibran Bassil alleges vote-rigging carried out through his ministry.

We would like to invite you to blog at our premises @ Rootspace--Beirut, please read on.

Help us make a difference! The International Blog Action Day this year, on October 15, will bring together thousands of bloggers from all over the world to talk about Poverty. One Day, One Issue, thousands of voices. Bloggers united against Poverty, each a different point of view.

We could be part of the conversation. We can make a difference from Lebanon by joining the entire blogosphere and focusing on the issue of poverty.

You are cordially invited to join the Social Media Exchange team and influential bloggers across Lebanon at Rootspace—Saife to blog, write about the issue of poverty and help us connect the Lebanese blogosphere so that together we can make a difference. Please invite your friends and spread the word.
Your participation is much appreciated.


In order to reserve a seat, please call Mohamad Najem our program coordinator on 03-792505 or submit contact info by e-mail to mohamad.najem@gmail.com
(This event is hosted for the sole reason of collaboration and is free of charge)

For more information about the Social Media Exchange program, please visit our blog: http://www.socialmediaexchange.blogspot.com/
or our Facebook page: http://www.facebook.com/pages/Social-Media-Exchange/49369130692

Thank you for your explanation. There really useful information.