The Seatbelt, the Phone and the Police in the Land of Drink and Drive 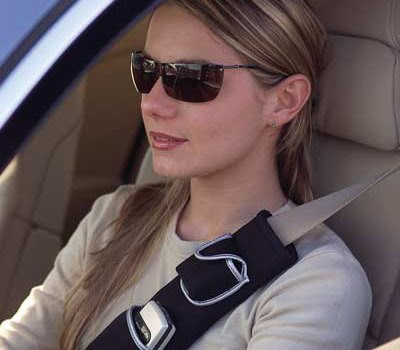 “Oh hold on, before we hang up, when you drive don’t forget to fasten your seatbelt and be careful don’t use your phone when driving unless in handsfree mode”. That’s how ended my first phone conversation with a friend after I arrived in Lebanon late September, and while I was still at Beirut airport. It was around 5 a.m that I found the 50 something cab driver waiting for me, and after getting in his car I was surprised by his reaction, he first fastened his seatbelt, and had a Bluetooth earphone plugged in his ear. Was I really in Beirut? As a good Lebanese who visited the homeland only a few months before this autumn, I didn’t use my seatbelt…
But I asked my driver about it, and he explained that these are the new regulations set by our young and fresh Interior Minister Ziad Baroud. Of course the driver complained about the police being severe, and fining people caught without their seatbelt on or speaking over the phone while driving. Of course, he ended our discussion saying that “it’s always like that, and it’s a matter of time before they will forget about it all and things will be back to ‘normal’, that’s how our police is”.
During my stay in Lebanon, I heard a number of stories about this subject. It was on daily basis from almost each friend or family member I met.
She always uses her seatbelt while driving, but this time, the busy young manager picked up her phone. How unfortunate, the policeman was only meters away and she had to park on the right in order to be fined. She was not the only one, there was another car ahead in the same situation. The guy in the car was arguing with the policeman, and he got out of the situation without the fine. It was only because he dialed a number, and passed the phone to the policeman who apparently got an order from a superior to leave “Mr irregular” alone.
When she saw the situation, she complained: why the guy before went out without any fine while she has to pay one? The answer she got was: “If you know ‘someone’ (influent), just call and it will do”. But I have my seatbelt on she said. Yes but you were speaking over the phone he replied. And the young policeman started to bargain with the charming young lady. Ok he said, I’ll fine you for the seatbelt, will that do? (P.S: The seatbelt fine is half the amount of the phone one)… I don’t remember how it ended, but found the bargaining situation interesting enough.
Another funny incident happened with two other friends, going the wrong way on a one way street. They were “surprisingly” stopped by two policemen. One of them, the older one insisted to confiscate the driving license. He was then busy with doing something so his partner, the younger one, took the opportunity (and the liberty), to ask the two ladies to call someone influent if they have connections, before the driving license gets to the police station and before the fine is officially filed.
It’s all about corruption and “clientelism” in Lebanon. When the orders to enforce the law come with goodwill from the top management, policemen in the streets have no choice but to obey. But apparently the problem resides in the middle management of the police, this filthy class of officers who accept to change the orders and breach the law to please a friend or a connection or a relative violating it.
That’s what I was thinking about while driving back home, seatbelt fastened and earphone plugged to my ear, but funnily enough, after having in my blood almost half a bottle of rum, doing my best to avoid endangering other drivers.
The traffic light turned red on Verdun Street, I stopped, and one car stopped just next to me while many others ignored the red light for it was after 2 a.m.

I felt curious enough to know more about this one other car that stopped on the traffic light. It turned green, and I insisted moving off very slowly, the Chevrolet passed me, and it has a … Kuwaiti plate!

Tanks bachir for your articles.
I think we are a lot we think lie you.
I was surprised too when someone asked to put the seabelt. No white lines in the streets, no traffic ligts(or very few) but the seabelt.
The country of contradictions.