Discrimination Against Moderate Muslims in Europe 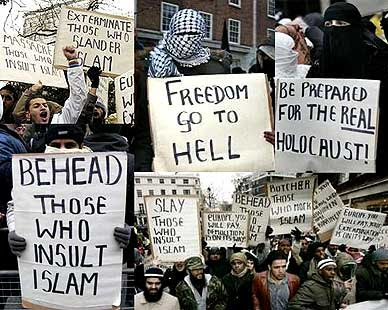 The Centre for Social Cohesion in Britain suggested in a report (click here to access Full Report) published this week that European governments are not doing enough to safeguard freedom of speech for Muslim reformers living in the West and facing threats from extremists.
In its report, the British think tank highlights the case of 27 writers and artists including Salman Rushdie (author of The Satanic Verses) and Maryam Namazie, (founder of the Council of Ex-Muslims in Britain).
The report recommends that European governments should "promote greater religious and social harmony by demonstrating that they see Muslims and those of Muslim background as complete citizens, neither restricted in their freedoms nor unduly permitted to issue threats against others".
This report will not make the headlines less than a week after the American elections and with the amplification of the economic crisis and its repercussions in Europe.
There is however a number of interesting questions timidly raised by the Centre for Social Cohesion. While admitting that European Governments do not treat their citizens equally, the report implicitly accuses them of discrimination against those who aspire to a new citizenship. In most cases and specifically when it comes to intellectuals and artists coming to Europe from Muslim countries, the request for a new citizenship is based on threats and general lack of tolerance they experienced in their country of origin.
But unfortunately, living in Europe does not prevent the anger of Muslim radicals and their fatwas against the moderate and reformist free minds. Salman Rushdie, Maryam Namazie and pop singer Deepika "Deeyah"* are few known examples. But how many others like them are intimidated and refuse to speak their minds to avoid being at risk. It is sad to see modern progressive Muslim minds going into “hibernation mode” when there is vital need for their vibrant presence.
On the other hand, the origin of the threat against moderates comes equally from another category of Muslim citizens in the West, who deserve to be openly called, and without any shame, parasites. By that I mean those who can combine benefiting from a European lifestyle with celebrating the 9/11 attacks**.
Those parasites are the most dangerous threat to moderates, for they benefit from the system hosting them and work to destroy it at the same time, while dreaming, for example, of a day when Britain will be governed by the Islamic Sharia law.
Those who show extreme ingratitude to their host societies are the same ones who intimidate their fellow Muslim moderates. They threaten them by playing watchdogs for the radical regimes abroad. And it is interesting here to mention how, for decades, many Arab and Islamic dictatorships have been obsessed with cleaning their societies from any modern alternative to their power or any reformist wind of change. And the Arab invention of “Hereditary Republics” proves how successful the cleaning process was for decades.
Finally, the Centre of Cohesion report has done well calling for European governments to safeguard freedom of speech for Muslim reformers. But it raises equally an interesting dilemma regarding how the governments can guarantee freedom of speech and belief to all their Muslim citizens, while helping the moderate voices within Islam in their struggle to be heard.
* Norwegian pop star of Afghan and Pakistini origin, who said she had been threatened, spat at and attacked with pepper spray after a video showed her removing a burka to reveal a bikini.
**http://switch3.castup.net/cunet/gm.asp?ai=214&ar=1859wmv&ak=null

Did you just copy and paste that picture off that internet? It looks photo shopped.

It is a combo picture taken from many different demos after what the Danish cartoons triggered.