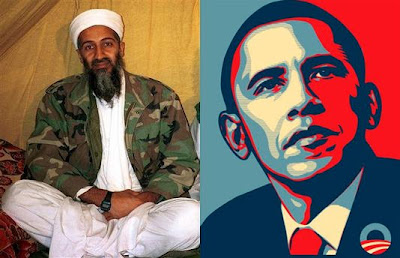 In a cold cave somewhere in the rugged mountains of the Pakistani-Afghan border, a group of bearded men stare at their Battery powered TV screens with obvious signs of disappointment. Jihad suddenly got tougher! The Bush-Cheney tandem, with which they shared an obsession for world domination and a weakness for guns, will be missed. In their place emerges a peculiar coalition of liberals, moderates and pragmatists led by a Black man called Barack Hussein Obama. The rhetoric will have to evolve and the slogans refined to adapt to the scenery.
Osama Ben Laden will have to restyle himself to avoid that too many Muslim kids turn to Obama for inspiration. If a Black man can become the most powerful on Earth why can’t we dream of a day that an individual from Arab stock can achieve a similar position, and by peaceful means?

Against all odds, America has shown that it is capable of changing course and chastising those who dragged it, and the world, into a failed ‘war on terror’ that was no less bloody and destructive than the ‘war of terror’ declared by Ben Laden and co. There is no reason to believe that Mr Obama will be less hawkish in Afghanistan or less pro-Israeli in Palestine. He has made it clear all along this campaign and is unlikely to change course with the eyes of Conservative Americans (McCain’s share of the popular vote was 46%) scrutinising his every move with distrust. The policy changes will most likely affect Iraq and the relations with Iran, both areas where the Al-Qaeda influence is in retreat. The bearded men will dig deep and rewrite their discourse as their motivation was never to reason the US or bring it to adopt a fair approach to the problems affecting Arabs and Muslims. Theirs is a fight in the name of an Ultra-Orthodox version of one religion among many and by definition can only end with their annihilation as a project.
In the meantime I suspect we will be hearing from them, whether through another Ayman Al-Zawahiri video or attacks on soft targets across the world. They will remind us that while once totalitarian project has been defeated another one still lurks in the shadow.
The Neo-Conservatives were defeated at the hands of the American people and it is hoped that the change in US administration will convince Muslim societies that bearded men in caves are no way to build a future.

Let's be clear on a couple of things here.

1. Mr. Obama won the presidency for a variety of reasons: 1) Mr. McCain’s campaign was poorly run and managed; 2) The Country was fed up with the policies of the Bush Administration; and 3) Mr. Obama’s past and present speaks to millions of people. He came from modest background. He was raised by a single white mother and single white grandparents who saw beyond the color of his skin as he did. Race for him was not an issue, because he is as much white as black. African Americans may have voted for him because of the color of his skin, but others voted for him because his story was similar to theirs. He is younger, more energetic, raised in a middle class environment with sometimes money problems. Furthermore, he is well traveled and yet not too cocky about it. So it's really not the first black man elected to office here as dubbed by some in media, it's the first man with substantive content in a long time.

2. Democrats (if they wish to maintain a lead in both houses and hope for reelection in 2012) need to reposition themselves center right. A welfare nation doesn't work well in a capitalistic society such as America neither does a neoconservative arrogant bomb-them-into-change government.

4. There is no reason to believe an Arab and Muslim cannot achieve the highest office in the United States, as was the case with Mr. Obama. Should they choose to do so, they would need to drop the “poor me”, “I’m angry at you white Christian man”, and “Jews control the world” approach lest they wish to suffer the fates of Mrs. Jackson and Sharpton. Of course replace Muslim with Christian and you will see similar attitude among many in the United States. Except that in the case of the United States, Americans proved time and again their ability to elect good leaders, learn from their mistakes, and change. When will that happen in the Middle East?

-Yes Obama will govern on the centre

-'The welfare state doesnt work in a capitalist society'.

Why not keep the welfare state and change capitalist society, since it has clearly failed to provide the majority of humanity with a sustainable quality of life.Judging from the last few months, I am surprised that capitalism is still seen as an end in itself. (I am not advocating communism, but promoting some soul searching)

- You can underestimate the fact that the most powerful job on the planet has gone to a non-caucasian white. This is symbolic beyond Obama the man and an important step on the road to fnally destroying the myth of white European superiority.(Still culturally entrenched among whites and non-whites).

-There wouldnt have been an Obama if it wasnt for Luther King and Jackson.lthough he was never a serious candidate he should be given credit fo maintaining that dream over th 80s and 90s (these are Ted Koppel's words, not mine)

Finally after this elections the world is a better place but it is still not a great place for millions.

Because the welfare state succeeded in providing the quality of life humanity deserves? All a welfare state does is reward everyone equally no matter the level of effort involved and encourages laziness. Bye bye merit based system.

Capitalism in itself hasn't failed in what it is intended to do. However, when you try to inject a welfare mentality into the housing market, that's when you start seeing problems. On the one hand republicans allowed Wall Streets to operate at will, no checks, no balance, and on the other democrats interpreted the American dream as everyone should own a house whether they can afford it or not. With variable interest rates (low at first and very high towards the end), enlarged loans, and a promise of flipping a property 2 years later at a much higher rate, everyone wanted in.
You want a debate about capitalism versus welfare, I’d be more than happy to oblige and I think it make for a fascinating debate (we’d be the only one interested though, I fear, haha).

Tedd Koppel is an amazing guy - though I reserve the right to disagree with him too - but truth be told, there would not have been an Obama if there had not been an Abraham Lincoln, a John Kennedy, and Lyndon Johnson.

Also, I disagree on the issue of overemphasizing his blackness, Mr. Obama was raised by a white mother and white grandparents even if other see him as black. The point I'd like to make is him being black will not necessarily advance the cause of African Americans in the United States (but that's not your message in the article).