May Chidiac or the Curse of the Living Martyr 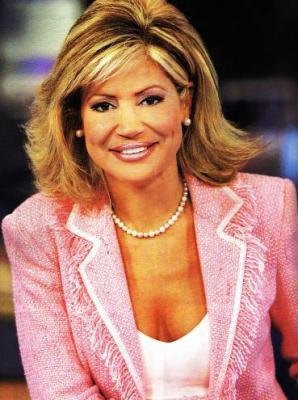 May Chidiac crowned herself the ultimate drama queen last Monday in a country where drama queens, and they are mostly of the male sex, dominate the political and media horizon. Her impromptu resignation speech at the end of her weekly debate show on LBC made me cringe in my seat. It was intimate, personal, raw; incoherent...basically it made for painful watching. The speculations are rife over May’s true intentions, and many have extended the cynical analysis to predict that her performance was a platform to launch her political career with the upcoming elections or a less radical move to the relaunched MTV (for Murr TV) in March. The new station is likely to be better anchored in the March 14th camp, unlike LBC which has been living a state of schizophrenic schism for many months. Obviously May had to invoke Jesus and a number of foreign and local saints to justify her behaviour. For those who have had any contact on a personal level with May Chidiac, it will be no secret that her personal views are those of the traditional Christian Right that dominated the landscape in the ‘Christian Ghetto’ of the 1980s. Her allegiance to the Samir Geagea of the ‘Lebanese Resistance’ era is unshakable. As the war ended the LBC and her staff underwent an intensely challenging ‘rehabilitation’ to allow them to function in this reunited Lebanon, where others had opinions that sounded repulsive and worthy of sniper fire only a few years earlier. The LBC was under pressure to succeed because they were by far the best placed, technically and professionally, to dominate the televised landscape in the post civil war era. They succeeded at a high cost, principally because of the astute maneuvring of Pierre Daher and the circumstances that surrounded the demise of the Lebanese Forces in the 1990s. May Chidiac’s public but skin deep conversion to the values of this multifaith/multiideological Lebanon served her image as a presenter well until the Cedar revolution. It did not resist the flames that engulfed her car on the 25th September 2005, the result of a bomb planted by professionals that remain unidentified nearly 4 years later. I will not linger on the psychological impact that such event can have on the life of any individual, even less on that of a successful reasonably attractive lady in the prime of her life. Reactions to trauma are difficult to gage form a distance, without falling in the trap of cheap psychobabble. However a reassessement of priorities and attitudes, however temporary, is to be expected, especially when the physical injuries act a s a permanent reminder of the event.

May Chidiac chose to use her scars and her recovery to advance her cause, and she was encouraged in this by her political sponsors, who also incidentally contributed to her medical bills. The climax came when, pointing at herself with her index finger she reiterated that she was a ‘living martyr’. The problem with this concept is that, while dead martyrs are generally placed on a pedestal, their qualities highlighted and their weaknesses ignored, it is partly out of the respect extended to every deceased. This is because the dead are unable to take or give criticism. May’s public performance proves that the living version still enjoys this function. As others who belong to this category (Marwan Hamade, Elias El Murr) will tell you, the ‘privileged’ status of having survived an assassination attempt cannot be abused in a country where blood is cheap and martyrs count in the tens of thousands since 1975. The harsh reminder came from the usual suspects, the masters of sarcasms at the Al-Akhbar newspaper in the pen of Mr Pierre Abi Saab. In his enthusiasm to chastise May Chidiac’s psychodramatic performance he neglected to mention that the blood of sacrifice has been waved unashamedly at the masses and in the face of opposition for many years. Ironically it is elements within his camp that have long been promoting psychodrama as a political tool, and that ‘Living martyr’ was the name of a Hezbollah operation against Israel in 1994, incidentally the subject of an upcoming movie directed by the Syrian Najda Anzour. From 2005, The Hariri media machine did not hesitate to recycle martyrdom, aggressively and visually instilling guilt in the hearts and minds of the population. The ‘Truth’ (Hakika) placards spread across Beirut are still a witness to their tactics. In my opinion, May’s public display of distress was unprofessional and of bad taste but she was only applying the lessons from years of experience debating our political leaders

Nevertheless, she did manage to cultivate enough sympathy that many world leaders would envy, she was at least successful at that.

Now, I'm sure the mother of any real Martyr is going to look at her and say, ah-huh? so? You're still alive! You can't compare yourself to anyone and you're not the first or last to lose limbs in this disgusting and atrocious conflict!

Interestingly, LBC allowed her to continue undisturbed until she finished. Which begs the question, did they REALLY not know about this stunt? Or is it good for ratings?

I think if it had been rehearsed they would/should have dosed it down a bit because it did go over the top.

Also with regards to why they didnt stop it, May Chidiac is an institution and it doesnt surprise me that she was allowed to continue. Also at more than one point she gave the impression she was going to stop...only to carry on again.

Who knows...but whatever it was, it wasnt a high point for Lebanese media.

Good article, balanced and to the point

I am 3 years late but I am extremely shocked to actually find people like you who call themselves Lebanese. You should be ashamed of yourself. You do not live with Dr. May Chidiac, you do not know of her pain and her suffering for the Cedar Revolution. You have not suffered along with her during her treatment in France. You have DEFINITELY not been with her when she received threats from people who think like you. I, just like Chidiac, defend your right to speak freely, but do not come about speaking as if you know about her cause and her pain. You should never speak of anyone's grief but your own, it would be pretentious and illogical as you are not in her shoes. It is actually sad that you have written such an article to promote your own cause. Next time, while expressing your opinion about someone as prominent and respected as Dr. May Chidiac, make sure you have sat next to her and listened to her speak with such conviction.