February’s Blog of the Month: The Philistine 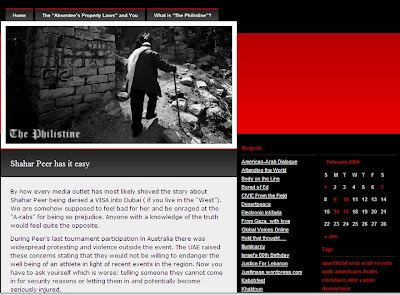 Israeli discrimination against its own Arab population is at the heart of the message delivered by "The Philistine". Whether in sports, in the media, trough legal or illegal means, his report on standard acts of oppression reveals a face of Israel that is little know in the West.
The Zionist dream is creating nightmares inside and outside its border and this blog aims to tell us of events and behaviors that could be easily go unnoticed while the world media focuses on Gaza and Hamas. His recent posts include the destruction of olive trees by Israel in the West Bank, the ban of Israeli Arab reporters from a Yisrael Beiteinu gathering and the truth on illegal settlements. Multimedia is used efficiently and the embedded videos, like the PBS 60 minutes exposing Israeli Apartheid, are to the point and acceptable to a Western audience.

Another appealing factor in this blog is that it is esthetically pleasing with its clear layout and sober colors. It inspires authority reinforcing the validity of the content. Its rich links sections reveals a good selection of respectable and original blogs and websites focused on Israel, Palestine and the diaspora.
The links maintained and developed with the Arab blogosphere are not surprising. The author provides insight and describes himself as a "disenfranchised American citizen of Arab heritage (…). Not being raised in communities with large Arab populations has left him feeling like an outsider in their own environment. Events as an undergraduate in a larger city with a significant Arab (mostly Lebanese and Yemeni) population brought to light the cultural differences between the assimilated and un-assimilated Arab youth".
He claims creating this blog as "a Testament to the Strength of Words (even those written with a keyboard) ".

However, the icing on the cake is his focus on a little explored area of Israeli legislation with serious consequences for the state’s Arab population. Under the section "The Absentee’s Property Laws and You", the Philistine exposes how the "Absentees" property laws "were several laws which were first introduced as emergency ordinances issued by the Jewish leadership but which after the war were incorporated into the laws of Israel. These laws were passed in an effort to gain as much land from the indigenous people as possible while circumventing International Law".

Beside linking the texts of laws, legislations and amendments of the "Absentee’s Property Laws", the Philistine draws a comprehensive list of the Palestinian villages taken over by the Israelis and demolished according the enforcement of these laws during The past 60 years.

We thank the author for shedding light on such a fundamental issue that is completely ignored by the mainstream media covering the Israeli Palestinian conflict. For the initiative, the research work and the presentation we name ‘the Phlilistine’ our blog of the month for February 2009.

Thank you all very much. I'm just happy that someone reads my blog.