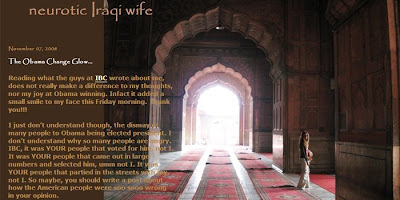 On Arabdemocracy, we will be featuring on a monthly basis a chosen blog from the Arab world that we believe has contributed to the promotion of debate and a democratic discourse in the region. The focus will be on overall quality, style, content and originality.
Watch this Space
The Editors @ Arabdemocracy

http://neurotic-iraqi-wife.blogspot.com/
Self confessed Neurotic Iraqi Wife (NIW) is Iraqi-British and in her thirties. She started blogging in August 2004 and her journey since then has taken us from London to Abu Dhabi through Baghdad. From her privileged position as the wife of an Iraqi expat involved with the American administration of Iraq, her story is also that of the country since the 2003 invasion. Her early posts are dedicated to and indeed dominated by HUBBY (husband). He remains anonymous to the readers, although the idiosyncrasies of Arab manhood are exposed with remarkable humour. A recent bride, NIW draws us into her world, comfortably sharing her anxieties over their young marriage with a wide and varied audience. The themes, taking into account the cultural context, are universal: The tension between career and family, the compromises to be made in a marriage and the stress of a long distance relationship. Mixing the personal with the mundane and the political, NIWs is observant and witty, commenting on everything from Iraqi elections to cosmetic surgery. We frequently accompany the couple on their R&Rs (Rest and Relaxation) around the world, from Amsterdam to Hong-Kong, as they do their best to defy the circumstances and strengthen their relationship. With the years NIW comes of age, in blogging terms and probably personally as well. She slowly redefines herself from a wife to a stand-alone commentator. This is very noticeable with her move to Baghdad in May 2005 after 15 years of exile. Her observations become more personal and she stops being the mouthpiece for her husband on Iraqi politics (Something that was unavoidable until then given the pressure from her readers for inside information).Despite the obvious relief of being with her husband, new tensions arise linked to the unique environment of the Restricted area at the heart of Baghdad known as the Green Zone (GZ). Judging from her writings, her mood states also closely mirror the ups and downs of the occupation, as experienced through the selective lens of the expats. From interaction with colleagues and fellow residents from all walks of life, all stuck in ‘EYERAK’, one cannot avoid connecting with the overwhelmingly claustrophobic atmosphere. She is not afraid to venture into other Middle Eastern issues, touching on the Israeli assault on Lebanon in July 2006, that she lives through the plight of her sister, trapped in Beirut under fire. She is also critical of prejudiced tendencies that she witnesses first hand within Emirati society. An unashamedly ardent Obama supporter over the past few weeks she makes a more tempered (and realistic?) assessment over his likely impact on the Iraqi situation. In a recent post she states her frank pessimism about Iraq in the short term, predicting an inevitable downturn of events that the US presence is only delaying

Enter the world of Neurotic wives...with a distinct Arab flavour

Wow AD!!!I seriously dont deserve all this. Im honestly humbled by your words. Thank you.

We only told your story, the way we read it in your blog.