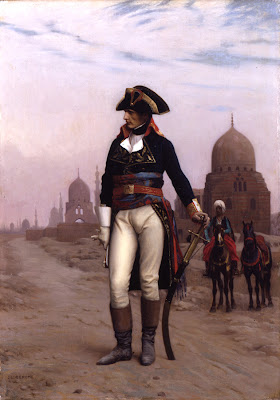 Fear of others may have evolutionary background as the survival of small bands of hunters and gathers (90% of human’s history) may have depended on it. However, we have outgrown much of our evolutionary baggage, and we’ll likely outgrow this as well. The age of conquest and domination seems to be over or at least replaced by economic dominance.
Most of the current Arab societies/states suffered from colonization. The era of subjugation by foreign powers started at least since the Ottomans moved from Anatolia south to occupy Syria, Jordan, Palestine, Egypt, and western Arabia between 1516 and 1517 CE (AD). Even before the fall of the Ottoman Empire in World War I, Egypt fell to Napoleon in 1789 then Britain in 1882. Algeria was under French occupation since 1830. Morocco’s occupation by France and Spain was completed in 1912 when the Sultan abdicated. After the end of the Ottoman rule in World War I, Arabs came under the rule of different European powers (Britain, France, Italy, and Spain) and some countries did not get independent until the 1970s.
In Prospero and Caliban, Octave Mannoni attempted a psychological examination of the phenomenon of colonization and its effects on colonized and colonizer (or colonial). He emphasized the link between the “dependence complex” and the inferiority complex of the colored peoples [sic.] and viewed it as similar to the inferiority complex [in individuals, mind you] described by Alfred Adler. Mannoni opined that the greatest fear of the colonized was abandonment not dependence. In fact, he asserted that colonized people were happy to establish a dependent relationship with the colonial when there is a threat of abandonment.
In the Arabic vernacular, the “Khawaja(t) complex” refers to a social phenomenon characterized by indiscriminate over-valuation of everything and everybody Western, European, or White—regardless of real or true value. The Khawaja(t) complex is usually conceptualized as a dialectical inferiority-superiority complex which manifests itself in the relationship between the stereotypical Arab (i.e. a hypothetical representative of the Arab crowd) and what/who is European, Western, or White.
According to Gustav LeBon and Eric Fromm, a sociological investigation focuses on the character matrix common to most members of a group; it does not take into account the character structure of a particular individual. Although Alfred Adler is better known for his individual psychology, he acknowledged the universality of inferiority feelings [in individuals], but he reserved the term “complex” to the individual who self-hypnotizes, or self-deceives into feeling superior. One may assume that a nation may self-hypnotize or self-deceives itself into feeling superior.
Children’s formation of concepts and attitudes starts at birth—and some learning starts even in the womb. By internalizing the world of the parents, siblings, extended family, tribe, and so on, overtly or covertly, colored children start learning that Western things and persons are more worthy than local things and persons. Messages in the mass media including movies and TV as well as what is learned directly from older generations may reinforce these beliefs. The “role models” are Western role models (e.g. Cinderella, Snow White, Tarzan, The Little Mermaid, Rapunzel, etc.).
Western technology is far advanced compared to Arab technology. There is very real superiority in the industrial machine in the West. There is cutting edge research and development that is also far advanced in the West. Manufacturing standards in the West are superior to the standards of local Arab countries. Therefore, it is only reasonable to expect Western goods to have higher quality than local goods. The accelerating pace of competition and the amount of money, time and effort invested in keeping an edge over competitors may prolong this differential.
Defeat and submissiveness that has plagued Arabs for the most part of this century. However, it is very hard to tease out the impact of 400 years of Ottoman oppression from the impact of the shorter-lived Western domination. The major difference between the Ottoman and British rules is the fact that the Ottomans were Muslims. In fact, the Ottomans have used that fact to gain favor among local tribes and promote acceptance among Arabs. Among the observant Muslims, the Ottoman Sultans are still viewed as the rightful successors of the Umayyad and Abbasid Caliphs.
In summary, the causes for the Khawaja(t) complex are educational, factual reasons relating to superior Western technology and superior products, and historical (repeated colonization by foreign powers since at least 1516 CE (AD). The keys to eradicating this complex and preventing it from taking hold in future generations are education, economic development, and home grown role models to replace the Osamas and Saddams and their ilk.

This reminds me of a program I watched once on an Arabic SatelliTE TV. The target audience were young people. In it the presenter asked the question: 'In my daily life do I use anything made by Muslims?' (you can substitute for Muslim Arab, African, South American etc). He went on to show that in everything he did he had to rely on Western goods and technology. His wishes were for a day where he will only rely on Muslim goods.

Now, putting to one side this unrealistic and pointless aim in a globalised world, an important point is being made: economic reliance of the arab world on the West is almost pervasive. So this is not only a matter of perception. In the great shcmee of things WE ARE second-rate consumers and trouble makers occasionally. So in order to change our perception we also need to change the reality on the ground.A chicken and egg situation?