The ‘values’ of Israeli soldiers according to their spokeswoman 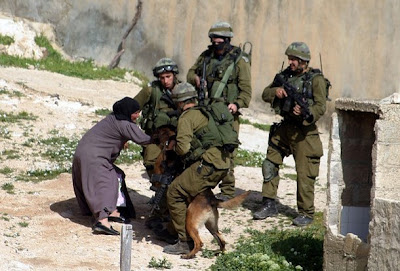 Major Avital Leibovich is an Israeli Army spokesperson with a talent for the use of the English language. Listening to her on BBC Radio commenting on the events in Gaza is the closest thing I will hopefully get to have my eyes pecked by hungry birds. It is not that Major Leibovich’s style is more revolting that for example the debonair attitude of Mark Regev (Israeli Foreign Ministry Spokesman).
This obviously well trained civil servant is not expected to deliver an objective assessment of the situation but the ‘truth according to Tsahal’, which technically consists at showing Israeli soldiers off for the cleanly shaven idealistic boy scouts that they aren’t.
The world is led to believe that these idealistic young men are fighting a war for civilization and will go back to their cozy jobs in IT once the Hamas hydra is defeated, passing by Goa (India) for an orgy of drugs, sex and trance music.
What I found of really poor taste was that according to Major Leibovich, who can be best described as a military version of Tzipi Livni, these soldiers were brought up and indoctrinated with ‘values’ that prevent them from targeting civilians deliberately. A principle they have clearly been applying since the early days of the Hagganah in the 1930s and which explains the murder of foreign activists Tom Hurndall and Rachel Corrie a few years ago. Maybe the judicious use of the word ‘deliberate’ clears them from the responsibility for the collateral loss of life through indiscriminate firing at human targets, bombing crowded refugee camps, using heavy artillery in dense populated areas, resorting to legal weapons illegally (white Phosphorus) and illegal methods illegally (so called targeted assassinations).
In a sentence, ‘we don’t shoot them on purpose but we couldn’t give a damn whether they would all perish as long as accomplish our mission’. In my books this moral attitude is not far from the one adopted by Genghis Khan as he swept through the then civilised world, ransacking and pillaging. Also standards of education in Israel seem to vary, since I remember well the picture of 9 year old schoolgirls wishing us hell on bombs later to be dropped on Lebanese villages.
One needs to only glance at YouTube to find examples of these same Israeli soldiers humiliating elderly Palestinians at check points and abusing Arab prisoners racially. Nonetheless in contrast, Mrs. Leibovich is quick to compare the behavior of her ‘boys’ to the Hamas militants who fire homemade rockets at Israel. That same Israel that has relentlessly hounded them, even during the truce, and has blockaded the strip for months keeping the resident population in the harshest of living conditions. Somewhat I doubt that if Hamas was endowed with the might of the Israeli army it would still resort to the same frankly desperate and ineffective tactics. Funny enough, we were reminded by the eminent Labour MP Sir Gerald Kaufman today, himself Jewish, that the foundation of the Israeli state rested heavily on terrorist actions, such as the notorious blowing up of the King David hotel in Jerusalem carried out by the Irgon. This outfit retains a privileged position in Israeli hearts and minds. So let’s not be fooled by prefabricated terms and expressions, this war is neither a clash of values nor a clash of civilizations. This war is about the land and justice that Israel insists on denying the Palestinian people.