We will fight them on the Web... 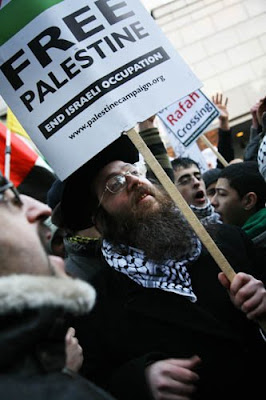 One wonders what can and should be done to support the people of Gaza during these difficult times. Many have chosen to demonstrate once, twice and as many times as their schedule allows. Others have used the web to either promote their version of events or shout as loud as possible their anger at Israeli aggression and the lack of action on the International front. Sadly, this pattern was repeated many times throughout the bloody history of the Arab-Israeli conflict.
It is important to be aware of why we do these things and whether they actually benefit the people of Gaza, ourselves or both. Recent Demonstrations in various European Capitals, such as London or Paris, have not reached the heights of the massive anti-war movement that preceded the invasion of Iraq in 2003. The crowds then were inflated because direct military involvement was on the agenda. Then, the millions who took to the street did not only include the usual suspects on the radical left, Muslim organisations and the Arab Diaspora. Looking at the crowds today on Saturday and Sunday, it is clear that those who do not fall in one of these categories were few in numbers. Witnessing such a barbaric war without taking to the streets seems inconceivable. After all, the demonstrations serve a dual purpose of containing the frustration for those emotionally, personally or politically involved who sit helpless in front of their TV screens while life goes on normally around them. The demonstrations also serve to support the morale of the people of Gaza and effectively their resistance. Any illusions that demonstrating has any effect on the policy of European governments should be dismissed. The campaign on the Web has a great potential as, beyond the first two goals, its interactive nature can also achieve a third goal: engaging the Israelis and their supporters in an attempt to make them reflect on the outcomes of their own government policies. To be effective, Arab bloggers need to engage the Israelis on their own territory, taking the discussion to their blogs, forums and online newspapers with clear arguments based on international human values but also on historical facts. This is not a psychological war to destroy their morale but rather a way to break the wall they have built on the ground and in their minds to isolate themselves from the reality they have created since 1948. Keep in mind that reading some Israeli bloggers makes a challenge for anyone with a hint of sympathy for the Palestinians, as the entrenched views displayed completely disregard the well-being and interests of others. For them, Israel should have been a desert, prepared to accommodate their ‘return’ 2000 years following the destruction of the Temple in Jerusalem. The Arab population is at best a parasite to be silenced, at worst a pestilence to be eradicated. Their concept of peace consists of us being quiet and not disrupting their ideal life in their promised land. But close scrutiny will reveal that their life is not ideal, whether the Kassam rockets stop falling, or not. Israel is and will remain a country suffering from a deep malaise, because it was built in a wasteland of its own making. We are unlikely to ever return to a pre-1948 situation, whatever the radicals in our camp say. The incomplete military campaign of 2006 and today in Gaza have paradoxically confirmed that a sustainable victory is unavailable to the Israeli military. At best they can sow death and destruction, causing one Government to fall and another to be discredited, while returning to a painful status quo afterwards and the malaise. Everyone concerned must know deep inside that living at peace with each other is inevitable, and one of its mechanisms will be to reassure those willing to listen among Israeli public opinion that a malaise-free life in the Middle Peace is possible, with Arabs and not against them.
This is a long- term strategy that will not immediately relief the pain in Gaza, but reinforcing the case of moderates in Israel is worth the effort. One anti-war protest in Tel Aviv is worth hundreds from Jakarta to Buenos Aires. Remember this equation when you write your next post.

I am liking what you write. You come up with interesting questions and make mention of good suggestions.

I agree with your ideas of what really a rally, demonstration or sit-in is and what purpose they serve. They are unlikely to play a pivotal role in decision-making. But they, along with other means of resistance and objection if fully and properly employed, may prove influential.

Let's not forget that the civil society, the public, the people are a driving force if mobilized. Revolution and change comes from the masses. History attests to that. Of course, with the Palestinian issue, it's a different story. It's one hell of a complicated issue. Like an imbalance in power play whose foundations are the abrupt formation of the 1948 state of Israel.

I guess I'm trying to challenge my own beliefs/behaviour as well through my writings. The truth is sometimes difficult to accept but after 60 years of misery the Palestinians and Arabs in general deserve more than just slogans. If we don't reflect seriously on what we have done so far we will not be able to improve and build on it.

I am optimistic for the future but we need our mental 'revolution' first.

interesting how the arabs are so clean handed in your post..

I am afraid I have spoken enough in the past (read my previous posts through labels) about how I feel about fundamentalism and corruption in the Arab world to have to include it every time I mention the Israelis.

This post is about a specific issue and I did not want to dilute it by adding obvious truths.

But thanks for commenting.

yes they do but fair enough

i know what you mean.. i get accused of the same thing and often feel the same way..

Totally agree. Great article. Will definitely be back.