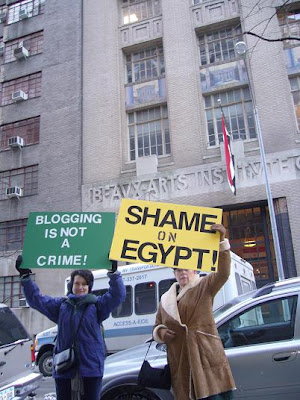 Once again the Arab world, known for its general ineptitude in anything involving competition on an international level (The Olympics, The World Cup, The Nobel Prize...among others), has topped the charts in the field of human rights deprivation and abuse.
This time we should be grateful to the authorities of Syria (3), Saudi Arabia (5), Tunisia (7) and Egypt (10) for flying the flag in the category of 'Worst Countries for Bloggers'. Tough competitions came from the likes of Burma (1) and Turkmenistan (9). Our Iranian brothers (2), with whom we seem to share so much these days despite centuries of enmity, narrowly missed the top spot but have promised to keep trying for next year. Same goes for the Egyptians who escaped relegation this time round. It is noteworthy that a number of these Arab countries are considered moderate and pro-Western. This fact will obviously not come as a surprise to our informed readers.
The Report was released yesterday 30th April in New York by the 'Committee to protect journalists' based on nominations followed by a poll of its staff and outside experts.
For the full report visit:
http://cpj.org/reports/2009/04/10-worst-countries-to-be-a-blogger.php

Shame on us! Really!